Dioecious climbers or lianes (rarely shrubs or trees). Leaves alternate, petiolate, entire, often somewhat peltately attached. Inflorescence cymose or racemose, often arising from old wood. Flowers inconspicuous; sepals and petals both in 1 or more whorls of 2 or 3; male flowers with 3–many stamens; female flowers with or without staminodes; carpels 1–several, superior, free, each carpel with 2 ovules (1 usually aborting); stigma terminal but becoming displaced toward base as fruit ripens. Fruit an umbel of small drupes.

About 350 species in 65–70 genera, tropical to warm-temperate regions of the Americas, Africa and Asia; 21 species in 12 genera currently recognized for Australia.

Stephania japonica is sometimes included as a member of the Victorian flora on the basis of two pre-1900 collections purportedly from Orbost and Genoa areas. However, for various reasons, both of these are of dubious origin and the species is not here recognised as Victorian despite its genuine occurrence near Eden in south-eastern New South Wales. Stephania japonica is similar to Sarcopetalum, but differs in the flowers being in umbels rather than racemes, and in the leaves with distinctly peltate attachment. 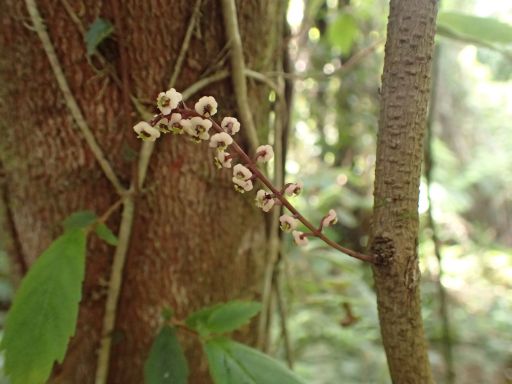