Perennial herbs or dwarf shrubs (not in Victoria), often woody at base, decumbent or spreading, often mat-forming. Leaves imparipinnate; leaflets increasing in size along rhachis, toothed or lobed; stipules persistent, adnate to petiole. Inflorescence terminal or axillary, a globose head or interrupted spike; bracts present; peduncles elongating in fruit. Hypanthium tubular, contracted at mouth, persistent in fruit; epicalyx and petals absent; sepals 3–5 (usually 4); stamens 2–10; ovary superior but closely surrounded by hypanthium, carpel 1, rarely 2, ovule 1 per carpel; style 1, rarely 2. Fruit 1 or rarely 2 achenes per flower, enclosed by dry hypanthium which bears 4–many barbed spines, or without spines (not in Victoria), aggregated into a burr-like or spicate infructescence.

About 100 species, chiefly in south temperate regions, extending to Hawaii and California; 7 species in Australia.

The taxa in this genus can be difficult to distinguish, particularly in the absence of mature fruits. Identification may be further complicated by the occurrence of hybrids which can display virtually all the possible character combinations. 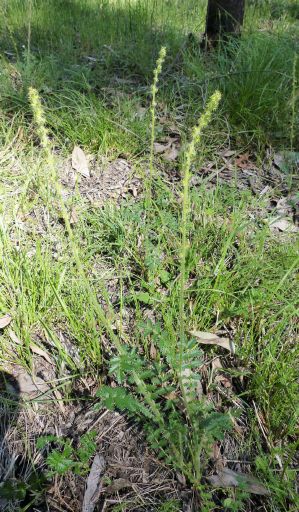