Perennial herbs, usually with rhizomes or corms, sometimes scrambling and shrubby or climbing vines, or free-floating aquatic herbs. Leaves alternate, often all basal, sheathing at base; petiole usually distinct; lamina expanded, simple or variously divided, or leaves absent, plants consisting of a leaf-like thallus, reproduction is largely only vegetative, with new thalli produced from a small slit or budding pouch (Lemnoideae). Inflorescence a terminal spike on a thickened axis, distal part of axis usually sterile, usually subtended and more or less covered by a coloured bract, or inflorescence minute, of 1 female and 1–2 male flowers, usually in a membranous bract, growing through thallus (Lemnoideae). Flowers small, often very numerous, bisexual or unisexual (then with female flowers below male flowers); perianth greatly reduced or absent. Stamens (1–3)4 or 6(or 8), opposite perianth (when perianth present), free or sometimes at least partly fused; filaments usually short and broad. Carpels 1–3(–15), if >1, fused; ovary superior; style short or stigmas sessile; ovules 1-many in each chamber. Fruit usually a berry or whole infructescence maturing as a multiple fruit, or fruit a small utricle (Lemnoideae); seeds 1–many, endosperm usually present.

About 110 genera and 3,330 species throughout most of the world, concentrated in tropical and warm temperate regions; 15 genera in Australia; 6 in Victoria.

Araceae has recently been re-circumscribed to include Lemnaceae. Phylogenetic analyses have recognised several clades within Araceae. However, these differ depending on the dataset, and a general consensus of groups within Araceae is yet to be reached. Two subfamilies that are generally recognised in Araceae are Lemnoideae, which includes taxa previously in Lemnaceae (i.e. Lemna, Wolffia, Spirodela ect.), and Aroideae, which includes all other taxa in Araceae (Cusimano et al. 2011; Mayo et al. 2013). This treatment follows the classification used by Mayo et al. (2013), recognising Lemnoideae as a separate subfamily due to the distinct morphological features seen in these taxa. Lemnoideae are characterised by the stem reduced to a thallus, ulcerate pollen, and absence of fine secondary venation (Cusimano et al. 2013).

Much of the dried herbarium material of lemnoideae (as held at MEL) is difficult to identify. A number of specimens in a population should be examined and the diagnostic features are easier to observe in fresh material.

In lemnoideae, the thallus has variously been interpreted as a modified stem, a leaf or partly stem and partly leaf (Cook 1990).

Anthurium, Monstera and Philodendron are commonly cultivated for their cut-flowers or as indoor plants because of their decorative leaves, brightly coloured bracts at the base of the inflorescence, and their tolerance to low amounts of light.

The leaves of Philodendron are very poisonous if eaten.

Key to the genera of Araceae 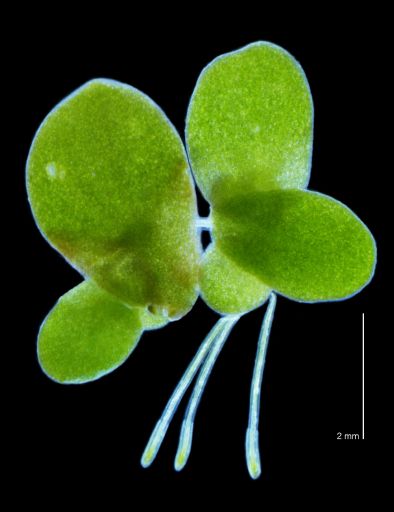