in Mitchell, Three expeditions into the interior of eastern Australia 1: 85 (1838) APNI

This somewhat weedy species is now presumed to be native in parts of Australia. However, the distribution of this species is likely to have been greatly increased following disturbance caused by agricultural practices, and it is unclear if this species occurred in Victoria prior to European settlement. Until recently Victorian plants were thought to be the introduced species Hibiscus trionum L. var. trionum, which is native to Europe and central Africa. Plants with simple lower leaves from inland parts of other mainland states have previously been regarded as native, and included in H. trionum var. vesicarius (Cav.) Hochr. These plants are now regarded as a separate species, H. verdcourtii Craven. Likewise, plants from the east coast of Australia and New Zealand are now included in H. richardsonii Sweet ex Lindl. See Craven et al. (2011) for further details. H. richardsonii occurs as a weed in garden beds at the Royal Botanic Gardens in Melbourne, but is otherwise not known to be established in the State. 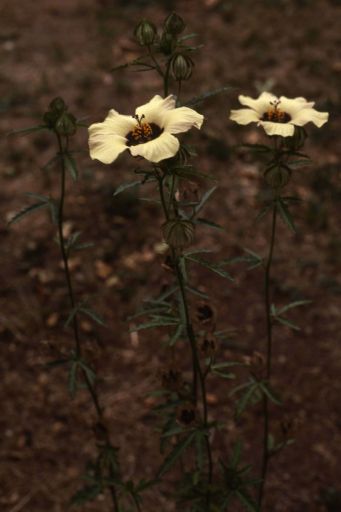