Annual or perennial herbs, often shortly rhizomatous. Leaves alternate radical or cauline, exstipulate, simple (in Australia), erect or floating; petioles winged at the base. Stems erect or floating, often stoloniferous. Inflorescence a fascicle or panicle (or, not in Victoria, a solitary flower or a raceme). Flowers regular, bisexual, sometimes heterostylous; sepals usually 5 (or 4, not in Victoria), free or basally united, persistent; corolla with a short tube and usually 5 (or 4, not in Victoria) spreading lobes, short-lived and deliquescent, corolla-lobes valvate or induplicate-valvate in bud, usually with entire or laciniate side-wings and a transverse fringe of hairs or papillae near the base; stamens alternating with corolla-lobes, attached at or near throat of tube, anthers 2-celled, linear-obloid, longer than the filaments, opening introrsely; ovary superior to semi-inferior, usually with 5 (or 4, not in Victoria) nectary lobes at the base, placentas 2–5, parietal, style simple, persistent, stigmas 2–5, each a papillate or laciniate lobe or wing. Fruit a capsule (or, not in Victoria, fleshy), ellipsoid to globular, indehiscent or apically 4-valved. Seeds few to numerous, endospermic.

6 genera with c. 60 species, throughout tropical to cold-temperate regions of the world; 3 genera native in Australia.

Key to the genera of Menyanthaceae 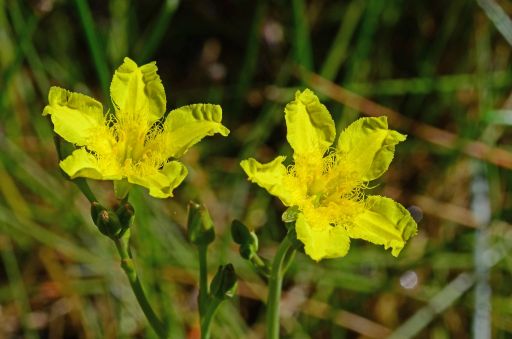