Grampians of Conn (1993) is called Greater Grampians in the current system of bioregions of Victoria. 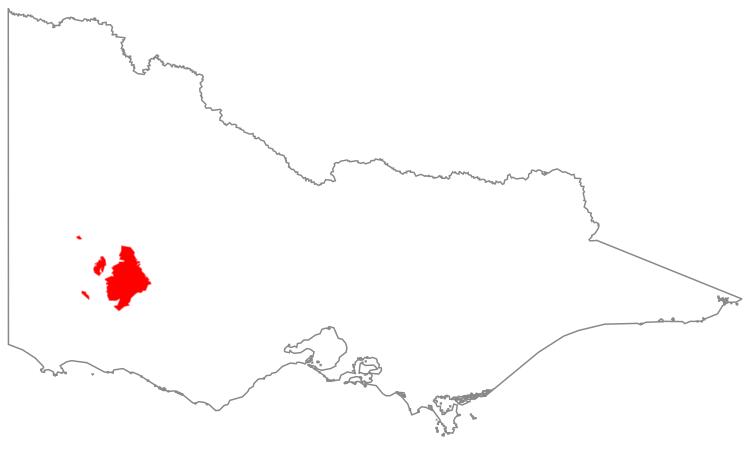 The Grampians extend from Mt Zero and the associated scree slope and sandy outwash plain in the north to Mt Abrupt and Mt Sturgeon (at Dunkeld) in the south. The region includes the Mt William and Serra Ranges in the east, with the Victoria and Black Ranges in the west (note: there is another Black Range near Stawell, east of the Grampians, but this is included in the Midlands Region). Two outliers, Mt Arapiles and Mitre Rock (west of Natimuk), and Mt Dundas (north-west of Cavendish) have been included in this region. The lateritized plain that occurs between the Black Range and the Grampians (between Brimpaen, Lah-arum and Glenisla) has been included in this region, even though this landform is more characteristic of much of the Wannon Region.

The distinctive topography of this region is a result of folding and faulting, and subsequent erosion of Upper Silurian–Lower Devonian quartzose sandstones. The roughly parallel ranges are characteristically scarp-faced on the eastern side, and dip gently to the west. Mt William, at 1168 metres, is the highest point in the Grampians. Valleys have formed by the erosion of the softer red siltstones and sandstones that are interbedded with the hard quartzose sandstones (Sibley 1967). Several Lower Devonian igneous intrusions are also present, and are exposed as hills and plains of granite or granodiorite. These granitic rocks are less resistant to erosion, and hence have become deeply weathered. They form the low hills between the Victoria and Serra Ranges, and the gentler slopes near Zumstein. Extensive plains of Pliocene and Post-Pliocene fluviatile alluvia are found in the southern part of the Victoria Valley and north-east of Dunkeld (in the Midlands Region). Holocene siliceous sands have been deposited as outwash below the sandstone scarps and along some of the internal valleys (see also Douglas, this volume).

The climate is mild (temperate) and the rainfall is relatively reliable, particularly on the higher parts of the region. Since the weather systems usually move from west to east, there is an orographic increase in the rainfall, particularly on the main ranges of the Grampians, such that much of the region receives a higher rainfall than the surrounding plains. The average annual rainfall varies from about 450 mm (Mt Arapiles) and 550 mm (Mt Zero) to at least 1000 mm (e.g. at Halls Gap, Mt Thackeray and Mt William) (Anon. 1979; Day, McGregor & Johnstone 1984, fig. 2.4). Much of the rain that falls in the Grampians is stored in reservoirs, and is subsequently used by the towns and farms in the Murray Mallee and Wimmera. The highest rainfall occurs in winter (between April and November), with a summer minimum (Sibley 1967). July and August are usually the wettest and coldest months, and January to March the driest and hottest (Calder 1987). Summer rains are frequently associated with thunderstorm activity. Precipitation in the form of snow is common on the higher peaks (particularly Mt William) during winter. Frosts may be severe, even at lower elevations.

The most extensive community occurs on the nutrient-deficient outwash slopes surrounding the Grampians and the Black Range. This community consists of shrubs that are widely spaced, with an understorey of heathy plants. The most common co-dominating tree species include Eucalyptus aromaphloia, E. baxteri, E. goniocalyx, E. obliqua, and E. willisii. Eucalyptus baxteri tends to be more common on the poorer sandy soils. This community is also found in the valleys within the mountains (e.g. the Wannon River valley between Halls Gap and Dunkeld, and the Victoria Valley) (Plate 6K). In the Black Ranges the dominant species are E. baxteri and E. obliqua, with some E. goniocalyx. Callitris rhomboidea is often prominent locally. The species in the heath understorey are the same as those mentioned within the Leptospermum continentale–Banksia marginata association (see wet heathland, above). Lepidosperma semiteres is a common component of the ground flora.

In the low areas between the ranges, Eucalyptus camaldulensis occurs over a grassy ground-layer, dominated by Danthonia and Stipa species. Other associated tree species include Allocasuarina luehmannii, A. verticillata, Eucalyptus leucoxylon, E. melliodora and E. ovata. This association is well developed along the Henty Highway, between Woohlpooer and the Billywing area. Eucalyptus leucoxylon and E. melliodora-dominated woodland/open-forest occurs to the east of the Black Range (west of Cherrypool), with Callitris rhomboidea a common associate. The shrub-layer commonly includes Acacia verniciflua, Astroloma humifusum, Brachyloma daphnoides, B. ericoides, Hibbertia prostrata, H. riparia and Pelargonium rodneyanum. The ground-layer is predominantly herbaceous (e.g. Themeda triandra) and is similar to that of the Eucalyptus camaldulensis-dominated dry sclerophyll forest. Frequently, large areas of bare ground or leaf and bark litter are present. At Zumstein a Eucalyptus melliodora-dominated woodland occurs on a rocky area in granite-derived, sandy soils. The understorey is very sparse, although Xanthorrhoea australis is occasionally common locally. The ground-layer is dominated by grasses and sub-shrubs (e.g. Astroloma conostephioides, A. humifusum, Brachyloma daphnoides, Ozothamnus obcordatus and Senecio linearifolius).

The rocky slopes are often dominated by stunted, mallee-like eucalypts that grow to a height of about 4 metres. Large areas of bare rock are also common. A low open-woodland with Eucalyptus alaticaulis as the dominant species occurs on the upper rocky slopes of the Mt Victory Range (e.g. at Reid’s Lookout). Other common eucalypts that dominate this community include E. baxteri and E. goniocalyx, with Callitris rhomboidea as a common associate. The understorey is characterized by Calytrix tetragona, Dodonaea viscosa, Leptospermum turbinatum and Melaleuca decussata. The dense sub-shrub layer is dominated by Dillwynia oreodoxa, Leucopogon neurophyllus and Platysace lanceolata. Mosses and ephemeral herbs (e.g. species of Centrolepis, Drosera and Utricularia) dominate the crevices and wet rock faces (Day, McGregor & Johnstone 1984).

Dry forests are composed of medium-sized trees, such as Eucalyptus baxteri, E. goniocalyx, E. obliqua and E. ovata. The E. baxteri–E. obliqua–E. goniocalyx alliance occurs on the sandstone ranges, mainly as a short forest. On the outwash slopes surrounding the ranges an E. obliqua–E. aromaphloia alliance occurs. This alliance merges with the E. baxteri–E. obliqua–E. aromaphloia-dominated heath woodland (Plate 6K). This community tends to predominate on the upper and middle areas of the outwash slope (usually wetter sites), whereas heath woodland is most common on the lowest and flattest areas of these slopes (hence, drier). E. ovata is confined to wet sites, such as creeks and watercourses, in the valleys, and on the outwash slopes of the Grampians. In moist areas the main shrubs are Acacia verticillata, Leptospermum continentale, L. scoparium, Melaleuca decussata and M. squarrosa. In drier areas the understorey is dominated by Hakea species. A low understorey of grasses, heaths and pea-plants is also present. This association occurs mostly over the middle and lower slopes of the main ranges of the Grampians, Mt Arapiles, Mt Dundas and the Black Range (Plate 6L). Dry sclerophyll forest also occurs on the outwash slopes, where it intermingles with heath woodland.

Open-forest, dominated by Eucalyptus camaldulensis, occurs on the more fertile alluvial soils, usually with E. leucoxylon and E. viminalis as co-dominants. Acacia melanoxylon frequently dominates the understorey. Banksia marginata and Exocarpos cupressiformis are also common. The shrub-layer is usually poorly developed; however, species of Leptospermum appear to be invading (Day, McGregor & Johnstone 1984). The ground-layer is usually dominated by grasses (e.g. Danthonia spp., Deyeuxia spp. and Microlaena stipoides), and small herbs (e.g. Bulbine bulbosa, Centrolepis spp., Drosera spp., Hypoxis spp. and Utricularia spp.) In areas where water remains for extended periods (e.g. Sheet of Water in the Victoria Valley), aquatic or semi-aquatic herbs are common (e.g. Restio tetraphyllus, Triglochin procerum and Villarsia reniformis. Eucalyptus aromaphloia may also occur on similar wet sites; for example, at Lake Wartook it occurs in the shallow waters of the shoreline. Here the shrub-layer is dominated by Leptospermum continentale, with the most common herbs consisting of Centrolepis fascicularis, Eleocharis sphacelata, Juncus planifolius, Leptocarpus tenax and Restio letraphyllus. This community grades into an open-forest of Eucalyptus baxteri–Acacia melanoxylon above the waterline.

This association is a tall open-forest that is dominated by Eucalyptus obliqua and E. alaticaulis, with the canopy about 22–35 metres high. The understorey includes Acacia melanoxylon (up to about 25 metres high), Pomaderris apetala (up to about 20 metres high) and Prostanthera lasianthos (particularly in the fern gullies). The shrub-layer varies from 1–4 metres in height; the most common shrubs include Acacia mucronata, A. verticillata, Bursaria spinosa, Coprosma hirtella and Correa aemula. The soils are usually shallow and gradational, and the mean annual rainfall is in excess of 700 mm (Anon. 1979). There is a deep moist litter-layer. A well-developed fern-layer is usually present in the cool, moist, sheltered gullies and on the eastern slopes of the ranges. The common smaller ferns of this subcommunity include Adiantum aethiopicum, Blechnum nudum, B. wattsii, Gleichenia dicarpa, G. microphylla, Polystichum proliferum and Todea barbara. The most common tree-fern is Dicksonia antarctica. The main occurrences of wet sclerophyll forest are at Lake Wartook, on the eastern slopes of the Victoria and Serra Ranges, at Delleys Dell in the Dairy Creek valley (eastern end of the Silverband Falls Road) (Figure 6.14) and near the Major Mitchell Plateau. The gully subcommunities are essentially riparian. At Scrubby Creek (Lake Wartook) the understorey is dominated by Acacia melanoxylon, A. retinodes, A. verniciflua, Pomaderris apetala and Prostanthera lasianthos with Todea barbara forming closed thickets locally (Audas 1919).

Fires, and extensive logging of the wet sclerophyll forests over many years have significantly modified these communities. In these disturbed areas, pioneer species, such as Acaena novaezelandiae and Pteridium esculentum, are common.

Conservation of the natural features of much of the region is ensured within the Grampians National Park, and most of the other areas are classified as State Forests. These reserves also provide important recreational and educational opportunities. The region has a long history of hardwood timber utilization (Calder, J. 1987). The harvesting of hardwood species from the Grampians National Park is to cease in June 1994. There are a few small softwood plantations of Pinus radiata (not included in the National Park; e.g. at Billywing near Woohlpooer, and on the eastern slopes of the Mt Difficult Range) that have only been partially successful. The commercial cutting of firewood is now restricted to the collection of the residue from timber harvesting (in the National Park) or from privately-owned land. Approximately half of the water for the Wimmera–Mallee domestic and stock water supply originates in the Grampians, with the remainder coming from streams below the storages. This water system is the largest gravitational-feed water system in the world. It covers one-eighth of Victoria’s area (Calder, J. 1987).