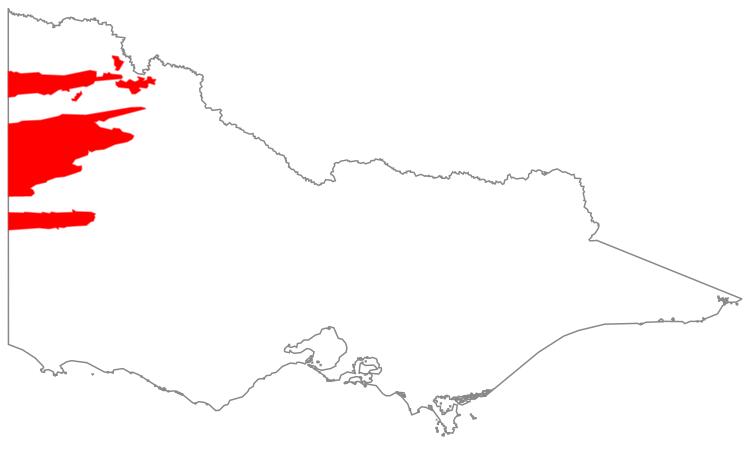 In Victoria this region consists of four disjunct ‘desert’ Lowan Sands areas. It includes the Little Desert in the south (between latitudes 36°25’S and 36°42’S), the Big Desert (between latitudes 35°15’S and 36°15’S), the southern part of the Sunset Country in the north (between latitudes 34°42’S and 35°5’S), and a small disjunct area in the southern part of the Hattah–Kulkyne National Park, to the east of the Calder Highway (at a similar latitude to the previous area). The first three areas join up in South Australia to form a single unit, with the western boundary formed by the Murray River, the eastern shoreline of Lakes Alexandrina and Albert, and the Coorong. This region incorporates part of the Murray Mallee of Laut et al. (1977a, 1977b).

In New South Wales a disjunct area occurs mainly to the east of the Darling River, from near Lake Mungo (latitude 33°42’S) in the south, to about the 32°30’S meridian of latitude in the north.

For a summary of the information available on this region, refer to Cottington and Harris (1987).

The topography of the region is characterized by loosely compacted surface formations, all of which are below 200 metres altitude. A useful summary of the geology and physiology of this region is provided in Anon. (1987), Wasson (in Noble & Bradstock 1989), Gibbons and Rowan (this volume) and Douglas (this volume).

The region is characterized by a semi-arid steppe-like climate similar to that experienced by the Murray Mallee Region. For further details refer to the previous region (above), Anon. (1987) and ‘Climate of Victoria’ (this volume).

For a brief discussion of the mallee habit and an overview of typical mallee communities, refer to the introduction to the vegetation of the Murray Mallee Region

This community occurs in the loose pale-yellow sands of the parabolic and irregular dunes of the younger Lowan Sand Formation (Anon. 1987). It is common in the southern Sunset Country. The community is dominated by Eucalyptus costata. The open shrub-layer is characterized by Acacia ligulata and Leptospermum coriaceum. The ground-layer typically supports Glischrocaryon behrii, Triodia scariosa and many composites (e.g. Helichrysum leucopsideum).

The mallee–heath communities have a high proportion of xeromorphic shrubs, and are intermediate in structure between the mallee shrublands and the heaths. This community commonly occurs on the white sandy dunes of the Lowan Sand in the Big Desert. The dominant eucalypts include Eucalyptus leptophylla and/or E. costata. The shrub-layer is typically dominated by Allocasuarina pusilla, Callitris verrucosa, Hakea muelleriana and Leptospermum coriaceum. There is a great diversity of co-dominant shrubs and ground-layer species. These include Aotus subspinescens, Baeckea behrii, B. crassifolia, Calytrix telragona, Comesperma calymega, Cryptandra leucophracta, C. tomentosa, Glischrocaryon behrii, Grevillea ilicifolia, Hibbertia riparia, Leucopogon rufus, Melaleuca wilsonii (particularly in the Big and Little Desert, and at Lake Hindmarsh in the Murray Mallee Region) and Spyridium subochreatum. Triodia scariosa is common. These grasses die in the centre as they slowly grow outwards forming rings and finally, through disintegration, crescents. The centre of these rings are often colonized by other plants. Common monocotyledons of the ground-layer include Lepidobolus drapetocoleus, Lepidosperma carphoides, L. viscidum, Lomandra collina, L. juncea and L. leucocephala. Banksia ornata–Xanthorrhoea australis shrublands dominate large areas (e.g. in the Little Desert). Banksia marginata and Leptospermum myrsinoides are frequent co-dominants. Mallee–heath and riverine communities from central Wyperfeld National Park are mapped in Figure 6.12.

Eucalyptus arenacea dominates the overstorey of a community that is restricted to the crest of dunes of the Lowan Sand formation in the Big Desert. Eucalyptus costata is often present. The tall, open, shrub-layer is characterized by Baeckea behrii, Callitris verrucosa and Leptospermum coriaceum. This community closely resembles the deep-sand mallee community.

This community is dominated by Melaleuca uncinata, with a scattered over-storey of Eucalyptus costata and/or E. leptophylla. Common shrubs include Acacia calamifolia, Baeckea behrii and Callitris verrucosa. The ground flora usually consists of Baeckea crassifolia, Glischrocaryon behrii, Hibbertia riparia and Stipa mollis. This community occurs on loamy swales and broad sand dunes, closely associated with the underlying sandstone. This community is common in the Big Desert, in a band to the west of Pine Plains and Lake Albacutya.

Callitris verrucosa (Scrub Cypress Pine) may frequent areas of mallee–heath, loamy sand mallee, or sandplain heath. If these areas remain unburnt for extended periods, a low woodland dominated by Callitris verrucosa develops (Anon. 1987). The shrub-and ground-layers are very sparse. The many-branched trees reach a height of about five metres. Since fires occur frequently throughout the region, this community occurs as small isolated and scattered remnants, with the most significant occurrences in the north-eastern parts of the Big Desert and in the Wyperfeld National Park.

This community occurs on lunettes associated with creek systems in this region. It is dominated by Callitris preissii (Slender Cypress Pine) and/or Allocasuarina luehmannii (Buloke). The community is more common in the Murray Mallee Region. Refer to the latter region for further details. In this region the community occurs on the Wirrengren Plain along Outlet Creek, just north of the Wyperfeld National Park.

The term ‘heath’ or ‘heathland’ refers to the ericoid low shrublands that are characteristically dominated by Epacridaceae, Casuarinaceae, Myrtaceae (particularly Leptospermum), Proteaceae (particularly Hakea and Banksia), Rhamnaceae and Xanthorrhoea (Specht 1972). The herbaceous layer is commonly dominated by Cyperaceae and Restionaceae. The soils are usually sandy and have a low fertility.

In this region, the main occurrences of this alliance are in the Big Desert and the Little Desert, where it is characteristically dominated by Allocasuarina pusilla, Banksia ornala and Xanthorrhoea species. Other common species include Acacia, Allocasuarina muelleriana, Banksia marginata, Baeckea, Calytrix, Correa, Cryptandra, Hibbertia, Hypolaena, Lepidobolus, Lepidosperma, Leptospermum myrsinoides, L. coriaceum, Leucopogon and Pultenaea (Plate 6D). The height of the heath varies from 0.5 metre to about 2 metres.

A series of NNW–SSE trending ridges underlie the dunefields. These sandy ridges have been lateritized into red sandstones which occasionally outcrop (e.g. Red Bluff, Big Desert). This community is dominated by Melaleuca uncinata and Baeckea behrii. Eucalyptus calycogona, E. costata, E. dumosa or E. socialis are occasionally present. Other shrubs are uncommon, however, Acacia calamifolia and Cryptandra tomentosa are usually present (Plate 6E).

This community is a minor component of the vegetation of this region. The most significant example of this community occurs on the flood-plains of Outlet Creek in the Wyperfeld National Park (Figure 6.12). The soil is characteristically a grey clayey loam, usually with well-contrasted profile differentiation (essentially duplex in structure). This community is also described for the Murray Mallee and Riverina Regions.

Refer to description of this community for Murray Mallee Region.

The example of this community at Outlet Creek, Wyperfeld National Park (Figure 6.12), has been so degraded that the mature trees are dying without regenerating.

Refer to description of this community for Murray Mallee Region.

Parts of this region have been cleared for the cultivation of cereal crops and grazing; however, most attempts at agriculture have been unsuccessful. Melaleuca uncinata is harvested for ‘brush fences’. The National and State Parks ensure the conservation of the remaining native flora and fauna.