In the current system of Victorian bioregions the Otway Plain natural region of Conn (1993) has been divided into the Warrnambool Plain and Otway Plain bioregions. 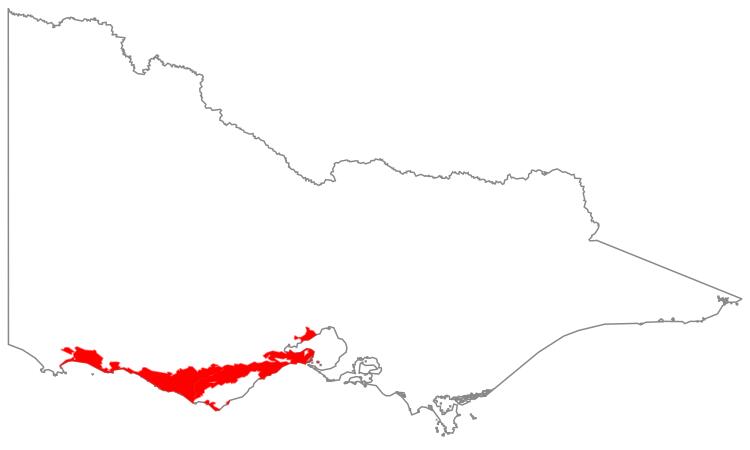 The Otway Plain includes the Tertiary sediments of the coastal plains that are bounded on the north by the Quaternary Newer Volcanics of the Victorian Volcanic Plain Region. In the south the region is bounded, in part, by the Southern Ocean and the Lower Cretaceous sediments of the Otway Group. The region extends from near Allestree (Portland Bay) in the west, to and including the Bellarine Peninsula in the east. A narrow projection of the Victorian Volcanic Plain (near Point Flinders, Barwon Heads) separates the Bellarine Peninsula from the remaining western part of the region. The boundary with the western part of the Otway Range approximates to the 200-metre contour (following the Chapple Vale Fault), including the Gellibrand River valley. The boundary with the eastern parts of the Otway Range encompasses most of Moggs Creek—to the west of Aireys Inlet (on the coast), and the lower reaches of Painkalac Creek north-west to just south of Bambra (inland).

The Tertiary marine sediments of the Otway Basin form a coastal plain that extends up to 50 km inland (Wopfner & Douglas 1971). Jenkin (as cited in Douglas 1977) recognizes two subgroups of this coastal plain. The flat or slightly undulating Port Campbell Plains occur to the north and west of the Otway Range, whereas the slightly sloping Torquay Plains occur to the east of these ranges. In general, the Port Campbell Plains slope gently to the west, reaching an altitude of over 200 metres in the east (e.g. Fergusons Hill). However, overall, these plains are below 100 metres in altitude. The Torquay Plains are regarded as a remnant of a plateau that rises to a maximum elevation of about 210 metres (near Wensleydale) in the west.

The soils associated with the Tertiary sediments are mostly duplex soils, with ironstone common in the profile, and are known as the Gellibrand Marl. These soils have developed where stream dissection has cut deeply into the ancient plateaus, exposing the lower lateritic horizons and Tertiary unconsolidated marls and clays (Pitt 1977; Gibbons & Rowan, this volume).

Barred streams are present on the Port Campbell Plains to the west of the Otway Ranges (e.g. Curdies and Gellibrand Rivers) (Douglas, J. G. 1977).

The region has a temperate climate, characteristically with warm to hot, dry summers and cool, wet winters. Most rain falls between April and November. During winter and spring, rain-bearing north-westerly and south-westerly winds flow over the region. In summer, dry northerly to easterly winds are common. In the south-east the Otway Range significantly modifies the local climate. In particular, there is a rainshadow area immediately to the north-east of these ranges that significantly reduces the amount of rainfall north and north-east of Anglesea. In general, inland localities have less rainfall than localities towards the coast. The mean temperature maxima are higher inland than on the coast during summer. The lack of significant topographical relief results in the extreme temperature maxima being more or less constant throughout the region (refer Linforth 1977). Frosts are more severe and more frequent inland compared to localities near the coast where frosts are rare. Snow is very rare, being only recorded in 1901 and 1943 (Linforth 1977). See also ‘Climate of Victoria’ (this volume).

Most of the native vegetation of this region has been cleared or is now being cleared for settlement. In many areas the native plants have been completely replaced by alien pastures, crop plants, and weeds. Remnants of the pre-European flora are scattered, and frequently are significantly disturbed.

Damp sclerophyll forest (28–40 metres high) is generally confined to the Lower Cretaceous sediments of the Otway Range, but they also occur to a limited extent on the clayey soils derived from the Tertiary sediments of this region. In this region they occur in those areas receiving a mean annual rainfall of more than 900 mm. The most common dominant species is Eucalyptus baxteri; however, E. obliqua and E. viminalis are also common, and may exist as co-dominants. Acacia melanoxylon is also commonly associated with this community. Examples of this community occur near Gellibrand (in the Otway State Forest) and also in the low ranges to the west of the lower Gellibrand River.

The understorey is generally more open than is found in similar forests in the more mountainous areas of the adjoining Otway Range. Characteristically, it is composed of a dense, tall shrub-layer that is dominated by Acacia mucronata, A. myrtifolia, A. verticillata, Banksia marginata, Epacris impressa, Goodenia ovata, Hakea ulicina, Lomandra longifolia, Olearia argophylla (particularly along creeks), Pimelea axiflora, Platylobium obtusangulum and Xanthorrhoea australis. Tetrarrhena juncea is also common.

Forests of Eucalyptus viminalis were formerly dominant over large areas from north of Anglesea to about Barongarook (Parsons, Kirkpatrick & Carr 1977). All but a few remnants of this vegetation (e.g. along Love Creek, near Gellibrand), have been cleared. E. obliqua and E. radiata occur as sub-dominants on wetter sites, with an understorey of Acacia melanoxylon and scattered shrubs of A. mucronata, A. stricta and Leptospermum continentale. Lomandra longifolia and Pteridium esculentum are common components of the ground-layer. On drier sites a dry sclerophyll woodland or layered forest occurs (e.g. at Bellbrae, north-east of Anglesea), the understorey is dominated by scattered shrubs of Bursaria spinosa and Acacia paradoxa, with a grassy herb-layer of Poa labillardieri, Lomandra longifolia and Themeda triandra.

These open-forests or woodlands (15–28 metres high) are co-dominated by Eucalyptus baxteri and E. obliqua. They occur on Tertiary sediments of low nutrient status and moderate rainfall (mean annual rainfall 700–900 mm). This community extends into the Otway Range (e.g. near Barongarook). The understorey of the open-forest consists of several heathland species (e.g. Banksia marginata, Leptospermum continentale, Lomandra longifolia and Tetratheca ciliata), whereas the woodland is characterized by Acacia mucronata, Leptospermum continentale and Ozothamnus ferrugineus. The amount of disturbance in the woodland is significant, hence the high frequency of opportunistic native species in the shrub- and herb-layers (e.g. Ozothamnus ferrugineus, Platylobium formosum, Pteridium esculentum and Tetrarrhena juncea).

A lower open-forest (less than 15 metres high) occurs on drier sites (mean annual rainfall less than 700 mm), particularly in the rain-shadow area to the east of the Otway Range, near Anglesea. This Eucalyptus baxteri–E. obliqua-dominated forest grades into a woodland community on poorer sites. The understorey is similar to that which occurs in the dry sclerophyll forests of the wetter areas.

E. tricarpa-dominated dry sclerophyll forest occurs on exposed dry sites (mean annual rainfall 690–840 mm) near Airey’s Inlet (Kirkpatrick 1970). Here, this species forms almost pure stands over much of its range. It also associates with E. alaticaulis and E. obliqua (and to a lesser extent E. globulus on moister sites). The most common shrubs of the understorey include Acacia longifolia, A. verniciflua, A. verticillata, Epacris impressa, Goodenia ovata, Pultenaea daphnoides and Spyridium parvifolium. The ground-layer is commonly dominated by Poa sieberiana, with occasional Astroloma humifusum. On drier sites the shrubs are absent and the herb-layer alternates with bare ground.

Leptospermum myrsinoides (Silky Tea-tree) heathland is largely confined to this region, although it also occurs in the Otway Range, the Brisbane Ranges (Midland Region) and the Gippsland Plain. The dominant species include Aotus ericoides, Epacris impressa, Hakea sericea, Leptospermum continentale, L. myrsinoides and Tetratheca ciliata. Other common species include Amperea xiphoclada, Banksia marginata, Bossiaea cinerea, Dillwynia glaberrima, Goodenia lanata, Monotoca glauca, M. scoparia, Pimelea linifolia and Xanthorrhoea australis (Plate 6T). The community occurs on Tertiary sediments of low nutrient status, in areas of moderate rainfall (mean annual rainfall 660 mm). Adjacent to this community, a dry heathland understorey is dominated by a low open-woodland of Eucalyptus baxteri, E. radiata, and occasionally E. willisii. This community occurs predominantly in the Gellibrand River valley. An E. willisii-dominated woodland with a heathy understorey occurs on leached sands that have an impeding layer near the surface (Anon. 1976) (e.g. Bald Hills, north of Anglesea, Plate 6U). It also occurs with E. baxteri at Hanson Plain, south-east of Cobden, west of Lavers Hill, and near Barongarook (all on leached sands). E. baxteri tends to occur on leached sands that do not have an impeding layer, or it occurs on sodic duplex soils (Anon. 1976).

Coastal heathlands are common in the Anglesea and Port Campbell areas. Near Anglesea the community is dominated by Leptospermum continentale, L. scoparium and L. myrsinoides, with other common species including Allocasuarina pusilla and Gahnia radula. Leptospermum lanigerum and Ozothamnus ferrugineus dominate a coastal heathland above a Phragmites australis-dominated swamp above Campbells Creek. This community grades into the Eucalyptus ovata-dominated woodland with a dense heathland understorey. This latter community occurs on the wetter, lower slopes. The higher, drier sites support the Eucalyptus baxteri or E. obliqua-dominated woodland that also has a dense heathland understorey. Ozothamnus ferrugineus, together with Leptospermum continentale, forms dense stands (3–4 metres high) in near-coastal areas that have been cleared of forest (e.g. near Wattle Hill).

Earl & Bennett (1986) recognized a riparian scrub association that is associated with streams and wet depressions. They recognized two communities. In one community (Community 7), a Melaleuca squarrosa and Leptospermum continentale-dominated closed shrub-layer forms the understorey to an open-forest of Eucalyptus baxteri or E. obliqua at higher altitudes (220 metres). This community occurs in the Carlisle area and the Gellibrand River valley. Gleichenia microphylla frequently forms a dense scrambling mass amongst dominant species. In the other community (Community 8) that occurs at lower elevations (160 metres), Melaleuca squarrosa and Todea barbara form a very dense (closed) understorey to a Eucalyptus spp. and Acacia melanoxylon-dominated wet sclerophyll forest. It is known from scattered localities along the Gellibrand River.

A Sarcocornia quinqueflora and Juncus krausii-dominated saltmarsh occurs on the mud flats at the mouth of the Anglesea River and at Aireys Inlet (south-eastern part of region). Associated species include Disphyma crassifolium subsp. clavellatum, Distichlis distichophylla, Hemichroa pentandra, *Plantago coronopus and Sebaea albidiflora. Melaleuca lanceolata (normally a species of elevated, well-drained, non-saline soils) occurs on the sub-saline flats at the mouth of the Anglesea River. Triglochin striatum often forms a dense herb-field on the mud flats between the water’s edge and the (more inland) Sarcocornia–Juncus community (e.g at Aireys Inlet).

The major agricultural industries in the region include dairying, beef-cattle and sheep grazing, and potato and onion growing. Brown coal is mined near Anglesea. Some hardwood and softwood timber harvesting occurs in the region.