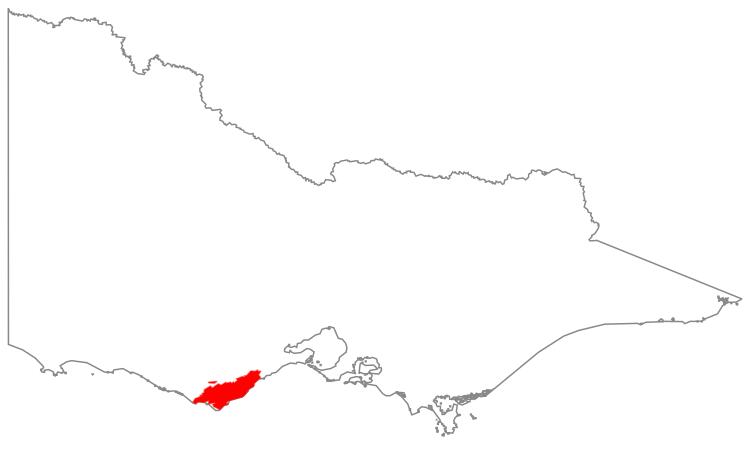 The Otway Range extends from the southern limits of the Tertiary sediments of the Otway Plain (in the north) to the coast in the south. The region includes the Lower Cretaceous sediments of the Otway Group (Anon. 1976; Douglas 1977). The most westerly limit of the region approximates to the 200-metre contour (following the Chapple Vale Fault), including Moonlight Head and a narrow coastal strip to the east of the Gellibrand River mouth. The Gellibrand River valley is excluded from this region (being included in the Otway Plain). The western boundary excludes most of the communities that occur on the coarse Tertiary sands (e.g. heathlands and woodlands with heathy understorey). The eastern boundary of this region follows the western limit of the Moggs Creek catchment, then swings north to just south of Bambra.

The Otway Range is composed of alluvial and fluviatile non-marine sediments (sandstones and shales) that were laid down in a basin or rift valley during the Lower Cretaceous (Gill 1977). The elevation of these sediments began in the mid-Cretaceous period (Douglas 1977), and resulted in a large elongate dome. The topography is steeply dissected, especially on the northern inland fall and on the southern coastal fall, whereas it is sometimes undulating on the top of the range. The terrain near the coast is often less steep, although massive sand-dunes may also be present (e.g. Quaternary Sands on the western side of Cape Otway) or the steep southern slopes of the Otway Block (Lower Cretaceous) continue to the coast. Tertiary outcrops are also present (e.g. near Cape Otway and near Lorne). The highest point in the region is Mt Cowley (670 metres), with the elevation of the main ridge reaching about 500 metres. A detailed account of the geology of this region is provided by Wopfner and Douglas (1971).

The soils associated with the Lower Cretaceous sediments of the Otway Range are chiefly fertile loams and earths (Gibbons & Rowan, this volume) and in high-rainfall areas (mean annual rainfall 1000–2000 mm) support forests of Eucalyptus cypellocarpa, E. globulus, E. obliqua and E. regnans. These soils often occur in deeply-dissected terrain, and landslides, slumping and sheet erosion are common. In areas where the mean annual rainfall is less than 1000 mm, open-forests of E. globulus, E. obliqua and E. radiata, occur. The soils surrounding the Lower Cretaceous sediments are extremely variable, and are generally podzolic (for details refer to Pitt 1977).

The streams tend to radiate out from the central range. The main stream that originates from the northern side of the region is the Gellibrand River. The streams of the southern slopes are generally short and swift-flowing. These include the Barham, Cumberland, Kennett and Wye Rivers.

The climatic variation within the region is primarily associated with the topography of the ranges. In general, the climate is characterized by hot, dry summers and cool, wet winters. In summer, easterly to northerly winds flow over the region, whereas in winter and spring the winds are westerly or south-westerly. These latter air flows are rain-bearing, with the result that the Otway Range experiences frequent and often heavy rain during winter and spring. The main ridge of the Otway Range is the wettest part of the region (mean annual rainfall greater than 1800 mm) (Linforth 1977). The rainfall is very reliable, with the winter rainfall being up to about 2.5 times that of the January falls. The mean temperature maxima are higher inland than on the coast during summer; however, the coast has slightly higher maxima in winter (for details refer to Linforth 1977). Frosts are rare on the coast, and may be very localized inland. Snow occurs at higher elevation two or three days per year (see also ‘Climate of Victoria’, this volume).

Cool temperate rainforest is widespread in the region but has been significantly reduced in abundance since European settlement. These forests are geographically isolated from other rainforests in Victoria, and represent the western extremity of this vegetation type in Australia. Examples of this community occur at the headwaters of the Johanna River (Figure 6.17), Carlisle River, Lardner Creek, Upper Gellibrand River, Skenes Creek and Smythe Creek (Gowans, Yugovic & Myers 1985; Earl & Bennett 1986).

These communities are characterized by open-forest (less than 40 m high) to tall open-forest (exceeding 40 metres high) communities. Eucalyptus regnans (Mountain Ash) is commonly dominant on the wetter sites (mean annual rainfall greater than 1270 mm). This species often forms pure stands at elevations above 488 metres. In the southern parts of the region (e.g. along Cape Otway Lighthouse Road in the Otway State Forest) it commonly forms mixed stands with one or more of Eucalyptus brookeriana, E. cypellocarpa, E. obliqua and E. viminalis. At lower altitudes (122–274 metres), E. globulus is also present (e.g. in the Parker and Kennett River areas (Parsons, Kirkpatrick & Carr 1977). E. cypellocarpa typically occurs in a zone separating E. globulus from E. regnans-dominated forest. E. ovata is widespread in the region, and characteristically occurs on poorly-drained sites in valleys and flats. E. viminalis is particularly common along watercourses (e.g. upper Parker River valley), in wet depressions and on floodplains. The most widespread eucalypt in the region is E. obliqua. This species occurs on very infertile to fertile soils, from the range to the coast and on wet to dry sites. It commonly associates with E. globulus, E. cypellocarpa and E. regnans. On even drier sites it occurs with E. aromaphloia, E. baxteri, E. willisii, E. radiata and E. viminalis (in dry sclerophyll forest or woodland communities) (Parsons, Kirkpatrick & Carr 1977). Natural hybrids between E. regnans and E. obliqua (known as ‘Otway Messmate’) are common.

The ground-layer and understorey beneath Eucalyptus globulus varies with rainfall from a grassy ground-layer (e.g. Poa labillardieri, P. sieberiana and Themeda triandra) (hence forming a grassy forest rather than a wet sclerophyll forest), with or without a sparse shrub-layer of Acacia stricta and Ozothamnus ferrugineus, to a denser shrub-layer of Acacia mucronata and/or A. verticillata and Pultenaea daphnoides. Leptospermum continentale and/or Melaleuca squarrosa often form dense thickets under Eucalyptus ovata.

Wet sclerophyll forests and damp sclerophyll forests are widespread throughout the region, ranging from riparian to montane environments. They predominantly occur in high-rainfall areas on the slopes of the Otway Range and in moist lowland situations on Cretaceous sediments of moderate–high nutrient status (Earl & Bennett 1986). Taller forests occur at higher altitudes, in high-rainfall areas.

Eucalyptus baxteri, E. obliqua and E. radiata co-dominate to form an open-forest to woodland at low elevations (140–240 metres), or E. obliqua dominates the other species (together with E. ovata) to form an open-forest (altitude 120–170 metres) throughout much of the lower Gellibrand River valley (e.g. Carlisle River and Lardner Creek areas, Earl & Bennett 1986). These forests and woodlands occur on Tertiary sediments of low-nutrient status and moderate rainfall. This community is more common in the neighbouring Otway Plain Region to the north and north-west. The understorey of the former alliance is composed of several heathland species (e.g. Banksia marginata, Leptospermum continentale, Lomandra longifolia and Tetratheca ciliata), whereas the latter alliance is characterized by Acacia mucronata, Leptospermum continentale and Ozothamnus ferrugineus. The amount of disturbance in the latter alliance is significant, and is expressed by a high frequency of opportunistic native species in the shrub- and herb-layer (e.g. Ozothamnus ferrugineus, Pteridium esculentum and Tetrarrhena juncea). Platylobium formosum is often also present.

Woodlands dominated by Eucalyptus pryoriana occur on the dune crests and in some of the interdune corridors to the north-east of the Cape Otway lighthouse. Other species that form woodland communities include E. kitsoniana, E. willisii, E. ovata and E. pauciflora (for further details refer to Parsons, Kirkpatrick & Carr 1977).

Leptospermum myrsinoides (Silky Tea-tree) heathland is primarily restricted to the Gellibrand River valley of the Otway Plain to the north and north-west of the Range (see description under the Otway Plain Region).

Inland heathlands occur predominantly in the Carlisle and Gellibrand River valley areas of the Otway Plain (mean annual rainfall 1090 mm). The following brief description of this community is included here because the generalized nature of the western boundary incorporates some of this community in the Otway Range. This closed community is dominated by a number of sclerophyllous shrubs and herbs, including Acacia suaveolens (usually on better-drained soils), Empodisma minus, Gymnoschoenus sphaerocephalus, Leptospermum continentale and Melaleuca squarrosa. Other common species include Bauera rubioides, Gahnia sieberiana and Sprengelia incarnata. This community is restricted to depressions and areas of impeded drainage on coarse sandy Tertiary sediments. A similar community occurs near the coast in the Blanket Bay area (mean annual rainfall 860 mm) and near Marengo (mean annual rainfall 1120 mm), both to the east of Cape Otway. Many of the coastal heathlands from Cape Otway to Lorne are dominated by Leucopogon parviflorus. These heathlands are usually dense and are 1–1.5 metres high. Other common shrubs include Acacia sophorae, A. verticillata, Acrotriche affinis, Alyxia buxifolia, Correa alba, Leptospermum laevigatum (up to 3 metres high), L. scoparium, Lomandra longifolia, Olearia axillaris, Ozothamnus turbinatus and Rhagodia candolleana. Allocasuarina verticillata (about 4 metres high) is usually scattered throughout the community. Leucophyta brownii is common on steep, exposed coastal cliffs, usually with Leucopogon parviflorus. Isolepis nodosa, Lepidosperma gladiatum and Poa labillardieri are scattered, but may be common, particularly in more open areas.

Earl and Bennett (1986) recognized a riparian scrub association that is associated with streams and wet depressions. Melaleuca squarrosa and Leptospermum continentale dominate a closed shrub-layer in an open-forest of Eucalyptus baxteri or E. obliqua at higher altitudes (220metres). This community occurs in the Carlisle area, Gellibrand River valley (both Otway Plain Region) and the Otway National Park.

Utilization of the hardwood forests for timber and pulp (for paper and hardboard) has a long history in the region (Anon. 1976). Extensive Pinus radiata plantations occur in the region (e.g. near Beech Forest). The major agricultural industries include dairying, beef-cattle grazing and potato growing. Large areas of forest are presently reserved for water supply management.