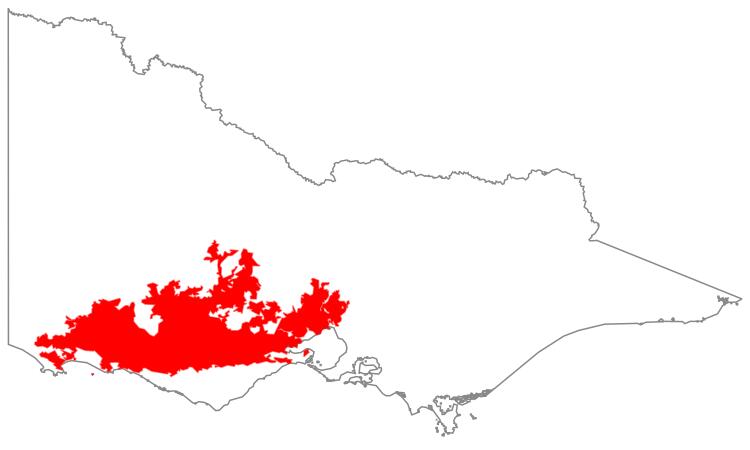 The Victorian Volcanic Plain extends from a latitude of approximately 38°20’S, i.e. from Port Fairy, Warrnambool, Colac, Winchelsea to Geelong (in the south), to Dunkeld and the Grampians (in the north-west), to Buangor, almost to Ararat and to Mt Cameron (in the central north) and to Kilmore (in the north-east). In the west the region extends from the Wannon River and Greenwald to Wallan East, Morang South and Preston (in the east). Outliers occur in the Mt Kincaid–Portland area (south-west) and in the Ballan—Mt Wallace area (east).

The Victorian Volcanic Plain is defined largely on geological features (Anon. 1964; Ollier & Joyce 1964; also refer to other papers in volume 77 (1964) of the Proceedings of the Royal Society of Victoria). Where the natural vegetation has not been modified or only slightly modified, the geological features and the vegetation are clearly strongly correlated. However, large areas of this and adjoining regions have been significantly modified, such that any vegetational differences that may have existed have now been lost. The boundary between this region and the Wannon is frequently difficult to locate, and it was necessary arbitrarily to define the boundary in some places. Likewise, the boundary between this region and the Otway Plain Region is based on the position of the basalt lava flows of the Newer Volcanic Plain (Anon. 1964), because insufficient natural vegetation remains on which to base such a decision.

This region is characterized by an extensive Upper Cainozoic (Quaternary) basalt plain (Newer Volcanic). Numerous volcanic cones rise to 120–150 metres above the plain. Although basalt cones are present (e.g. Mt Cotteril and Mt Hamilton), scoria cones are more common (e.g. Mt Elephant, Mt Misery, Mt Napier, Mt Noorat and Red Rock). Maars and calderas are common (e.g. Lake Bullenmerri, Lake Purdigulluc, and Tower Hill). Several types of lava flows occurred. The flattest of the lava plains resulted from sheet flows (e.g. in the Mt Cotteril area), whereas constricted flows followed valleys. Stony rises are also common throughout the region. These areas have a very irregular and confused topography, and usually lack definite internal drainage (e.g. near Pomborneit, Penshurst, Mt Eccles, and on the southern shores of Lake Corangamite). The youngest flows and the stony rises are only slightly altered by weathering processes, hence only shallow stony soils have developed. These reddish brown or sometimes black soils are fertile, high in available phosphorus, and vary from loams to clays. The older Pliocene flows of the Hamilton and Cressy areas have a greater development of deep soils including laterites. Soils derived from tuffs and scoria are generally friable, brown or reddish brown, well-structured and fertile (e.g. near Koroit). Dark saline soils occur around the margin of some lakes (e.g. Lake Corangamite). See also Gibbons and Rowan (this volume), and Gibbons and Gill (1964).

Most of the region receives between 500 and 700 mm of rain per annum. The wetter, south-westerly areas of the region receive about twice as much rain in the winter months (April–November) as the summer months. In the drier eastern areas the rainfall is more evenly distributed throughout the year. During winter the (rain-bearing) winds are mostly westerlies or north-westerlies, whereas during summer the winds are most frequently from the south-west to south-east. The warmest months of the year are January and February, with mean maximum temperatures ranging from about 20°C to 27°C. In winter the mean maximum falls to as low as 10°C. The mean minimum temperatures range between 3°C and 4°C during mid-winter (see also ‘Climate of Victoria’, this volume).

The species diversity of this region is very low. Willis (1964) recorded only 543 higher indigenous plants for the basalt plains of Western Victoria. Although these plains probably always had a low species diversity, the area has been subjected to a long pastoral and agricultural history, dating from the late 1830s and early 1840s. In most areas the native plants have been completely replaced by alien pasture grasses and clovers, crop plants, and weeds. Remnants of the pre-European flora are scattered, and are now confined to the sides of roads and railways, rocky areas that have not been cultivated or modified, sheltered gorges, cliff crevices or caves, or to small forest reserves (Stuwe 1986, fig. 2).

The grasslands of the basalt plains are dominated by short to medium height, tussock-forming grasses. Trees and shrubs are either absent or are restricted to watercourses, swamps or rocky hills and slopes bordering the plains. Dry tussock-grassland occurs in the Keilor and Geelong areas (in the east), whereas wet tussock-grassland occurs near Hamilton (in the west). The dominant native grasses include Danthonia species (particularly D. caespitosa, D. duttoniana and D. setacea), Dichelachne crinita, Elymus scabrus, Poa labillardieri, P. sieberiana, Stipa species (particularly S. bigeniculata) and Themeda triandra (Willis, in Douglas, M. H. & O’Brien 1974). Stuwe (1986) suggests that Themeda triandra was probably the dominant grass over most of the drier western plains, with Poa labillardieri being dominant on the wetter sites. The extent of Danthonia and Stipa species is uncertain, since they tend to replace Themeda triandra as the dominant species under grazing or other disturbances (Moore 1970). Herbs that commonly occur between the grass tussocks include Acaena echinata, Burchardia umbellata, Calocephalus citreus, Chrysocephalum apiculatum, Convolvulus erubescens, Cynoglossum suaveolens, Drosera peltata, Eryngium ovinum, Gonocarpus tetragynus, Leptorhynchos squamatus, Oxalis spp., Plantago gaudichaudii, Ptilotus macrocephalus, P. spathulatus, Schoenus apogon, Solenogyne gunnii and Wahlenbergia communis (Plates 6Q and 6R). Species of Minuria, Pimelea and Vittadinia are also common. Examples of these grassland communities can be seen near Willaura, and between Dunkeld and Cavendish. Burning or grazing reduces the height of the sward and the amount of accumulated litter (Stuwe & Parsons 1977; Gill, this volume).

Alien plants are particularly common, and most native grassland communities in this region have been significantly altered by agricultural and pastoral practices, and pristine native grasslands may be extinct (Stuwe 1986).

The Keilor Plains and the plains extending from Geelong to Cressy are, and have always been, open, dry tussock-grassland, lacking any arboreal growth or tall shrubs (Willis 1964). A few small trees (e.g. Allocasuarina luehmannii, Eucalyptus camaldulensis, E. microcarpa and E. ovata) occur along streams or in depressions where water persists. With an increase in rainfall, there is a gradual change to a wet tussock-grassland in the west of the region. Many species are common to both tussock-grassland communities. However, there is an increase in arboreal growth, such that grassy woodland and grassy forest communities are more common. Much of the stony-rises country near Mt Eccles and Mt Napier has been reduced to a fire-induced Pteridium esculentum-dominated fernland, with sparse grasses and herbs growing among the rocks (Anon. 1979).

The final stages of Cainozoic vulcanism in the region were predominantly explosive, yielding numerous tuff and scoria cones (Gill 1964). These deposits are geologically so new that they are only very sparsely vegetated. Trees have not naturally colonized these cones. Thus Red Rock, Mt Leura and Mt Greenock were virtually bare when first seen by Europeans (Willis 1964).

In moist conditions, an extensive *Eucalyptus viminalis-*dominated open-forest/woodland is common on the stony rises. The understorey (or occasionally co-dominant) consists of Acacia melanoxylon. The shrub-layer characteristically consists of Cassinia aculeata, Ozothamnus ferrugineus or Hymenanthera dentata (e.g. the latter species is common on the shores of Lake Corangamite). Pteridium esculentum and Senecio lautus are common ground-layer species (Plate 6S).

As for the basalt plains, the vegetation of many of the volcanic cones have been significantly disturbed. The explorer, Major Thomas L. Mitchell noted that ‘Trees and bushes grew everywhere luxuriantly’ on the summit of Mt Napier (Mitchell 1838). However, by 1963 extensive clearing by settlers resulted in the summit of this mountain becoming completely devoid of trees (Willis 1963). Only a low herbaceous ground-layer with occasional stunted shrubs remained (Willis 1963). After an active reafforestation program, the slopes of Mt Napier are now again well timbered, with Eucalyptus viminalis-dominated low open-forest. A similar forest or woodland (15–20 metres in height) occurs around Lake Surprise at Mt Eccles. Characteristic of this forest community, Acacia melanoxylon is the dominant understorey species. The shrub-layer is moderately dense to sparse, with Bursaria spinosa, Cassinia longifolia and Leptospermum lanigerum being the most common constituents. Exocarpos cupressiformis occurs occasionally on the rim of the crater. The ground-layer commonly consists of *Holcus lanatus, Poa labillardieri, P. sieberiana and Pteridium esculentum.

The deep, rich loam soils of the lava flows from breached crater walls were heavily forested. Unfortunately, most of these areas have been cleared for agricultural purposes. Layered forest (Eucalyptus obliqua–E. radiata–E. viminalis, up to about 30 metres high) still exists on the slopes of Mt Warrenheip and Mt Buninyong (south-east of Ballarat). The understorey is dominated by Acacia melanoxylon. The shrub-layer is often sparse, with occasional shade-tolerant shrubs, such as Coprosma hirtella, C. quadrifida, Olearia argophylla and Pimelea axiflora. The ground-layer is dominated by Poa species and several alien species. Willis (1964) reports that Dicksonia antarctica formerly occurred in a few shaded valleys on the sides of lava cones.

Eucalyptus willisii forms an open-forest alliance on fertile soils (e.g. in the Annya State Forest) with Eucalyptus aromaphloia and a shrub stratum including Acacia myrtifolia.

Allocasuarina verticillata–Banksia marginata-dominated woodland was once very widespread, but is now almost extinct (Scarlett, pers. comm. 1988). This community occurred in a mosaic with Themeda-dominated grassland.

Most of the region has been utilized for agricultural activities. The area has been extensively cleared, and only occasional narrow zones of natural vegetation remain. The greater part of the region carries sown pasture, and the major agricultural industries are dairying (although more common in the Otway Plain Region), and sheep (for both fat lamb and wool production) and beef grazing. There is some crop production (oats, barley and wheat), being largely confined to the northern parts of the region. Onion, peas and potatoes are important vegetable crops of the fertile volcanic soils.