About 15 species; 2 species native and 1 naturalised in Australia and Victoria.

There are two types of carpels in sterile 'female' flowers. One type is similar to that of fertile female flowers except the ovary and ovules are imperfectly developed. The second type has a modified carpel-stalk terminating in a short style, without an expanded stigma. For a discussion of the inflorescence and the reduced flowers, see Briggs & Johnson (1968).

During spring and summer, young shoots have been pulled up and eaten raw by Aboriginal people (Oates & Seeman 1979).

Vegetative features cannot be relied on to distinguish between the species; identification requires critical examination of the bracts, stigmas and styles. Care must be taken when identifying over-mature inflorescences, since parts or all of the stigmas and bracts may have fallen off.

Key to the species of Typha 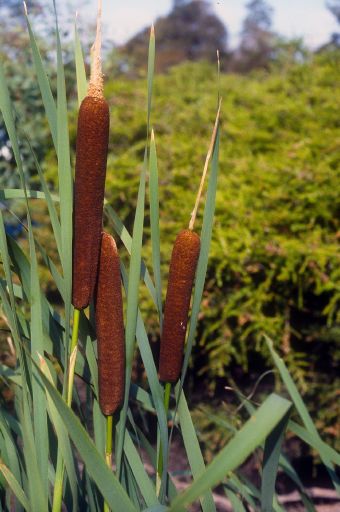