CVU, EGL, GipP, GGr, LoM, MuF, MuM, MSB, OtP, RobP, VRiv, VVP, Wim. Widespread in the north and north-west of Victoria where occurring in mallee scrub, in woodlands on heavy alluvial soils and on disturbed sites, occasional along the coast usually amongst rocks (e.g. Lady Julia Percy Is., Otway coast, Mallacoota), and in rain-shadow areas to the north and west of Melbourne (e.g. You Yangs, Bacchus Marsh, Sunbury areas).

Great variation exists in leaf colour and hairiness, plant stature and colour of the fruit, apparently distinct forms sometimes occur together at the same locality. Hybrids with Maireana turbinata have been recorded from the Manangatang and Annuello districts.

Enchylaena tomentosa var. glabra differs from var. tomentosa in its glabrous or glabrescent leaves and branchlets. It occurs near (but apparently not beyond) the Victorian border in south-west New South Wales. Some Victorian forms approach E. tomentosa var. glabra in having glabrous or near-glabrous leaves, but in most cases the stems retain short, woolly hairs unlike those of var. glabra as represented by the type. Where the less hairy form and typical var. tomentosa occur together, the former is more commonly procumbent while the latter is usually a spreading-erect shrublet. Fruit colour may also vary between the forms. Further research is required to clariify the taxonomy of the species. 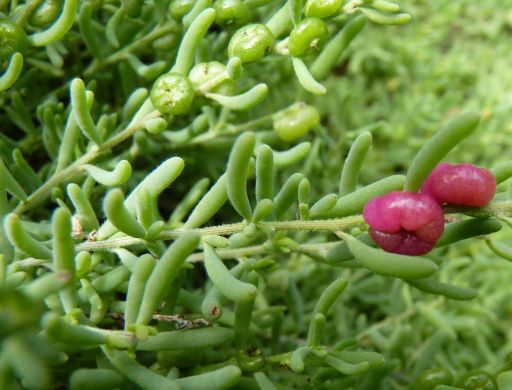