All States. New Zealand, New Caledonia. Grows vigorously in rock crevices and depressions, and although sometimes coextensive with Cheilanthes austrotenuifolia, C. sieberi is usually in drier sites with shallower soil.

Young fronds with curled lobes resemble a row of tiny clenched fists. Cheilanthes sieberi subsp. pseudovellea H.M. Quirk & T.C. Chambers (1983) from central Australia differs from the type variety in having a covering of fine white hairs on both sides of the lamina and sometimes the stipe. It is similar to Cheilanthes lasiophylla Pic.Serm., differing in the morphology of the scales and hairs which are branched in Cheilanthes lasiophylla. 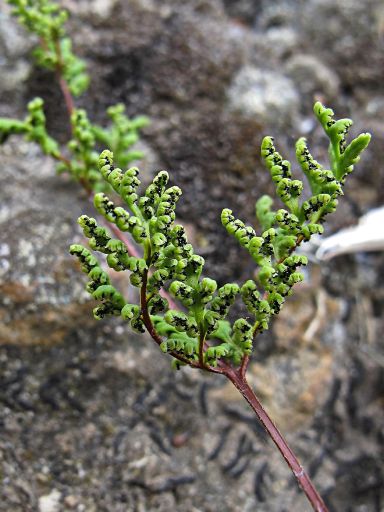