Brid, EGL, EGU, GipP, Glep, GGr, HFE, HSF, MonT, VAlp, VVP, WaP, WPro. Chiefly eastern, where fairly common in moist to dryish open-forests east from near Bairnsdale, with disjunct occurrences on French Is., the southern part of the Mornington Peninsula, Curdies River near Timboon and near the lower Glenelg River in the far south-west.

At least some populations on the Mornington Peninsula and adjacent Phillip Island have fruits that are white or yellowish rather than red at maturity. They appear otherwise typical of the species. Plants from coastal areas of northern New South Wales and southern Queensland are sometimes treated as a separate taxon. These plants have distinctly silky branchlets, relatively small and narrow leaves, and sepals that exceed the corolla tube.

The illegitimate name Leucopogon lanceolatus R.Br. has previously been applied to this species 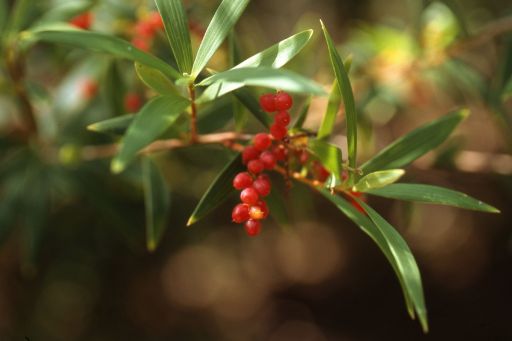