Evergreen, or sometimes deciduous, shrubs or small trees, lianes, or rarely, herbs, sometimes epiphytic. Leaves alternate, opposite or whorled, simple, sometimes sheathing at base, often pungent at apex, venation often palmate or parallel; stipules absent. Flowers bisexual, in racemes, spikes or panicles, sometimes solitary and terminal or axillary, each usually subtended by 2 bracteoles and 1 or more bracts; sepals 3–7, usually 5, often imbricate, persistent; petals equal in number to sepals, usually at least partially fused to form a tubular or campanulate corolla; stamens 4 or 5 and alternating with corolla lobes, or in 2 series and usually twice as many as petals; filaments free or adnate to corolla; anthers opening by a single longitudinal slit or by apical pores or slits; ovary usually superior, 1–11-carpellate, with as many locules as carpels (rarely unilocular or with twice as many locules as carpels); ovules usually numerous (rarely solitary) per locule; style solitary. Fruit a septicidal or loculicidal capsule, or a berry or drupe, occasionally separating into pyrenes. Seeds usually numerous, small, sometimes winged.

About 125 genera and 4010 species, widespread in cool-temperate regions and in tropical mountains; c. 44 genera with some 600 species in Australia.

Floral measurements are based on fresh or rehydrated flowers (some shrinkage occurs in drying). Branchlet indumentum refers to current season’s branchlets.

The vast majority of Australian species were previously included in Epacridaceae. This family formed a natural group, distinguished by xeromorphic leaves and flowers with only 4 or 5 anthers. Furthermore, most members can be recognised by parallel leaf venation, imbricate bracts surrounding flowers and unilocular anthers. However, molecular studies have found Epacridaceae to be nested within Ericaceae. As such, Ericaceae has been expanded to include Epacridaceae, which is now recognised as subfamily Epacridoideae (formally known as Styphelioideae) within Ericaceae.

Key to the genera of Ericaceae 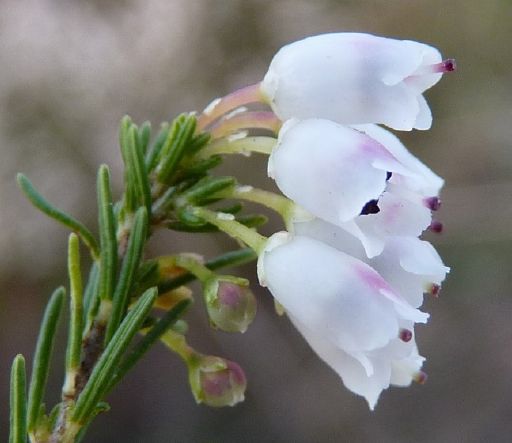