Trees, shrubs or twining hemiparasitic perennial herbs; usually aromatic in all parts. Leaves mostly alternate, rarely opposite or whorled, simple, entire, leathery or reduced to scales; stipules absent. Inflorescence axillary, usually a spike, raceme or head, rarely reduced to a single flower (not in Victoria). Flowers small, actinomorphic, bisexual or unisexual, usually perigynous with a well-developed receptacle; tepals usually in 2 similar or dissimilar whorls of 2 or 3, sometimes in 3 whorls of 3, or perianth absent; stamens in 3 or 4 whorls of 3, often some reduced to staminodes, filaments often glandular at base, anthers 2- or 4-celled, dehiscing by uplifting valves; ovary usually superior with a single carpel, 1-celled; ovules 1 per carpel; style simple; stigma capitate, 2- or 3-lobed. Fruit a drupe or 1-seeded berry, indehiscent, sometimes enclosed by the enlarged receptacle but not fused to it.

About 30 genera with up to 2500 species, mostly in tropical and subtropical regions of both Hemispheres with main concentrations in South-east Asia, South and Central America; 8 genera in Australia. 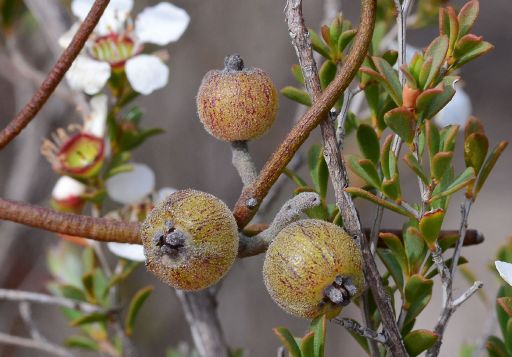