The involucral bract morphology of this variety of Senecio pinnatifolius allows it to be distinguished from other varieties. The outer involucral bracts have markedly narrower hyaline margins than the inner bracts. The inner involucral bracts have the stereome bordered by a purple line in the apical quarter which creates a distinctive chevron (often just discernible with the naked eye). Some bracts are bordered by a purple line along the apical quarter on one side only and represent an intermediate condition between outer and inner bracts. The purple coloration is confined to the apex in the outer bracts and does not form a border. Leaf dissection is highly variable. The commonest form has lanceolate leaves with regularly serrate margins. However, dissection may vary from deeply bipinnatisect to quite entire (particularly along coasts). There is also variation in capitulum and cypsela morphology with a form with relatively small capitula occurring in south-west Victoria and a form with glabrous or sparsely hairy cypselas occurring on lake shores in the south-west and in higher rainfall areas east of Melbourne (Thompson 2005). 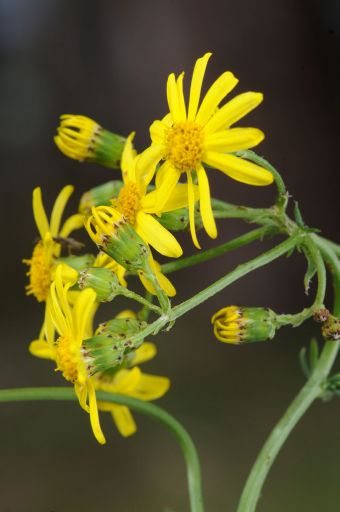