Herbs, shrubs or trees, glabrous or variously hairy, sometimes producing latex. Leaves alternate or opposite, rarely whorled, simple to compound; stipules rarely present. Inflorescence of 1-many dense capitula, each with (1–)few-many sessile (rarely shortly pedicellate) flowers on a common receptacle, the capitulum nearly always subtended by an involucre of 1-several series of bracts, occasionally capitula aggregated into compound heads and surrounded by a secondary involucre; receptacle flat to convex, sometimes a bract subtending each flower, sometimes bristly, or naked. Florets with inferior ovaries, bisexual, unisexual or neuter, often 2 types present within each capitulum; corollas ligulate and 2–5-toothed, or tubular and 4- or 5-toothed (when both present within a capitulum, the former called ray florets and the latter disc florets); anthers connate into a tube, the pollen released into the interior of the anther tube and pushed out by growth of the style; ovary unilocular, 1-ovulate, style 2-branched, variously hairy or papillate, branches usually spreading, stigmatic toward their apices (rarely throughout). Fruit a cypsela (rarely a drupe), often crowned by a persistent or deciduous pappus of scales or bristles (possibly derived from a strongly modified calyx).

Following the classification of Bremer (1994), tribes Cardueae to Arctoteae are included in subfamily Cichorioideae, and tribes Inuleae to Eupatorieae in subfamily Asteroideae. A third subfamily, Barnadesioideae, regarded as being ancestral in the family, is confined to South America.

Multi-access key to the Victorian Asteraceae 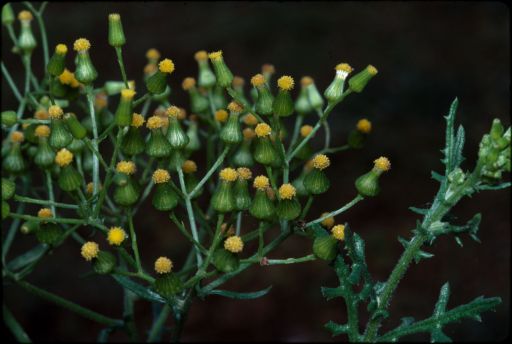