Shrubs or trees; indumentum of simple unicellular to branched hairs, or glabrous, sometimes glandular or viscid. Leaves alternate or opposite, sessile or petiolate, entire to lobed. Capitula solitary, axillary or terminal, or in corymbs or panicles, sessile to long-pedunculate; involucre campanulate to hemispherical or conical, bracts 3–9-seriate, graduating in length or subequal. Ligulate florets usually prominent, female, 1–4-seriate, rarely absent, white to mauve or blue, style arms filiform to subclavate; disc florets bisexual, yellowish, purplish or white, usually 5-lobed, anthers rounded, tapered, or tailed at base, with an ovate to triangular apical appendage. Cypselas mostly narrow-elliptic to obovoid, pubescent or glabrous, sometimes glandular; pappus of 1 or 2 series of barbellate bristles.

About 180 species, from Australia, New Guinea and New Zealand; c. 130 in Australia (all endemic).

Olearia as currently treated is polyphyletic (Cross et al. 2002). Based on this work, Nesom (2020) has described ten new genera from Australian species of Olearia. However, many of these are poorly resolved or lack strong molecular support and their circumscription seems premature. While some proposed genera appear to be reasonable, this treatment will not be followed here until further work has been undertaken to better clarify this group.

Olearia brachyphylla (F. Muell. ex Sond.) N.A. Wakef. has sometimes been reported as a Victorian species (e.g. Ross 1996), but the name has been erroneously applied to specimens of Olearia sp. 1 and O. minor. It is unlikely that O. brachyphylla occurs in Victoria although it approaches the State in mallee areas of South Australia. It closely resembles O. floribunda but is distinguished by the reduced ligules of the ray florets (a character of dubious merit—occurring occasionally in several species), and the quite sessile broad-based leaves that may be glabrescent on both surfaces.

Key to the species of Olearia 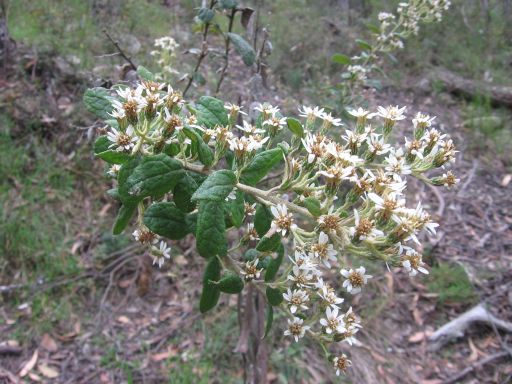