Annual or perennial herbs or subshrubs, sometimes stoloniferous. Leaves in basal rosettes and/or cauline and alternate, sessile, entire to bipinnatisect, glabrous, with glandular or fine, flattened or stiff, clear eglandular hairs. Capitula solitary, radiate, heterogamous; involucral bracts in 1 or 2 rows of about equal length or in 2 distinct rows of unequal length, mainly herbaceous but with scarious margins; receptacle convex to conical or globose; ray florets female, white, greenish-white, mauve, pink or yellow; disc florets bisexual, (4- or) 5-lobed, yellow; anthers with or without a terminal sterile appendage, not tailed; style branches widely deltoid to narrowly triangular in outline, c. 0.5–4 times the length of the stigmatic part. Cypselas homomorphic or dimorphic, terete, angular or flattened, with or without longitudinal ridges and/or wings, smooth to variously tuberculate, biseriate eglandular hairs and/or stalked glandular hairs sometimes present; pappus absent or a short crown of bristles or scale-like bristles. (Description based on Victorian species only.)

Currently 87 species, mostly Australian, a few native in New Guinea and New Zealand. Delimitation of the genus is problematic, with herbaceous species lacking a pappus or having only a short crown of bristles or bristle-like scales being included in Brachyscome without consideration of the considerable variation exhibited in habit, leaf shape and the morphology and anatomy of the cypselas and is almost certainly non-monophyletic. Consequently, segregate genera should be recognized.

Brachyscome aculeata, B. cuneifolia, B. riparia and B. spathulata.

The generic name has often been spelt ‘Brachycome’ but the original spelling is recommended (Brummitt 1993).

Key to the species of Brachyscome 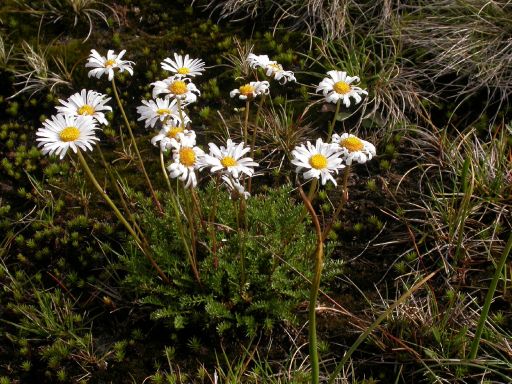