Brid, CVU, DunT, Gold, GGr, LoM, MuF, MuM, MSB, NIS, RobP, VRiv, VVP, Wim. Also SA, Qld, NSW. Occurs along the Murray River and its tributaries south to near Bendigo, in a belt north of the Grampians and south of Little Desert, on the western outskirts of Melbourne, and at a few scattered localities between Melbourne and the Grampians on inundated clay soils, commonly in Eucalyptus camaldulensis, E. microcarpa or E. largiflorens woodland.

Previously included in Brachyscome basaltica with all Victorian plants included under var. gracilis. Brachyscome basaltica occurs in Queensland and not in Victoria. Brachyscome paludicola is distinguished from B. basaltica in having linear or narrowly elliptic leaves that are narrower (narrowly elliptic, obovate to oblanceolate or lanceolate and 1–14 mm wide in B. basaltica) and in the cypselas being somewhat laterally flattened and usually having distinct longitudinal ridges and margins (swollen and without longitudinal ridges or clear margins in B. basaltica). Brachyscome paludicola also differs from B. basaltica in having a haploid chromosome number of six, not eight (Watanabe et al. 1996; Short 2014). 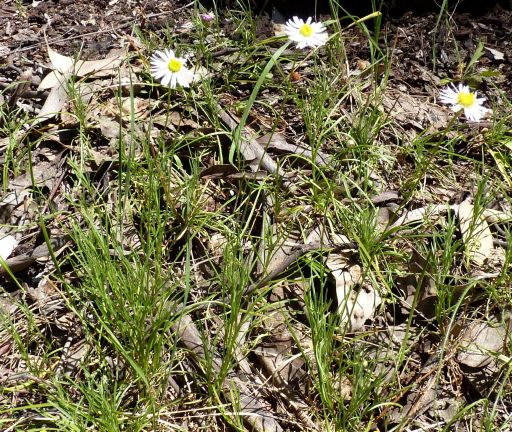