DunT, Glep, LoM, MuF, MuM, VRiv, VVP, Wim. Also SA, NSW. Usually growing in areas subject to inundation in the south-west and in the north of the state near the Murray River, between Swan Hill and Ulupna Island.

This species is unique amongst the Brachyscome species in having pappus bristles on the mature cypsela that are held horizontally or are downward-sloping (Short 2014).

Populations in northern Victoria differ from those in the south-west by often becoming larger in stature (3–23 cm high), with larger (0.5–9 cm long and 1–15 mm wide) and often more dissected (entire or once or twice pinnatisect with 1 or 3–20 lobes) leaves. Populations from the south-west are 3–13 cm high, with leaves that are 0.5–5 cm long and 0.5–7 mm wide, and are usually entire or at most pinnatisect with 1–4 lobes. However, recognition of northern and south-west plants as separate taxa seems untenable given that occasional plants are found with variable leaf form (Short 2014). The same chromosome number, 2n=10, has been recorded in both northern and south-west populations (Watanabe & Short 1992; Watanabe et al. 1996). Populations from northern Victoria are vegetatively similar to Brachyscome gracilis but differ in cypsela morphology. 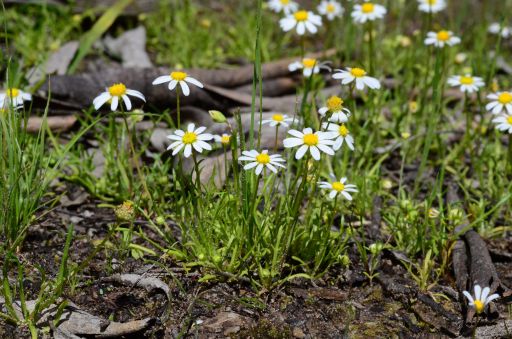