Most non-native members of this genus in Victoria were formerly treated as Conyza but molecular studies have shown that it, and several other (non-Australian) genera are nested within Erigeron (e.g. Noyes 2000). Until a satisfactory treatment of the group has been accepted, a broad but monophyletic Erigeron is employed here. The correct placement of the native Erigeron conyzoides remains uncertain but morphological features suggest that it belongs with 'Conyza-like' species and it is here retained within Erigeron. Other Victorian species previously included in Erigeron have been transferred to Pappochroma Raf. (q.v.).

The following notes might aid the identification of those species formerly included in Conyza. The key and descriptions are based on dried specimens. The striation of stems is more apparent in dried plants, and soft hairs may become stiffer when dried. The colour of the internal face of the inner involucral bracts when reflexed at maturity appears to be a useful specific character in Victorian material. The inner surface ages to almost completely brown (except for narrow pale margins), or to mostly a pale straw colour except for a narrow brown midrib and possibly brownish tip. The character is more difficult to discern on fresh or younger capitula. The degree of roughness of the receptacle is assessed at maturity when the bracts are reflexed. Some annual species resprout from the base if damaged and can continue to flower much later than typical.

Noyes, R.D. (2000). Biogeographical and evolutionary insights on Erigeron and allies (Asteraceae) from ITS sequence data., Plant Systematics and Evolution 220: 93-114.

Key to the species of Erigeron 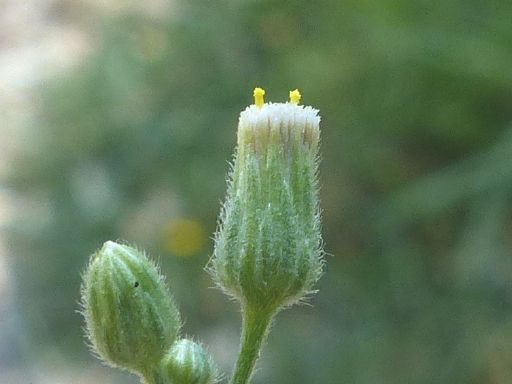