Three informal entities (previously recognised at varietal rank) have been noted in this species, “sericea”, “densiflora”, and “scabridifolia”. All three entities occur in Victoria. However, these are not currently formally recognised as numerous intermediates between these entities have been observed (Toelken 2000). “Densiflora” is largely recorded from coastal areas from Melbourne eastwards, with a few records from near Portland in the west of the State. This entity may be distinguished by the enlarged central ridge of the leaf undersurface that almost extends to the apex and is at least twice the width of the revolute margins, which largely conceals the lower leaf surface. “Sericea” occurs in near coastal areas in western Victoria and Port Phillip, with isolated records in the Grampians. It has relatively long leaves (5–8 times longer than wide), often with recurved to slightly revolute margins, exposing the lower surface of leaves, and the leaf-like bracts exceed or are as long as the calyx. “Scabridifolia” is mainly in the west of the state in mallee woodland, and is distinguished by the short leaves with revolute margins, and the short bract-like leaves that do not extend more than half way up the calyx. 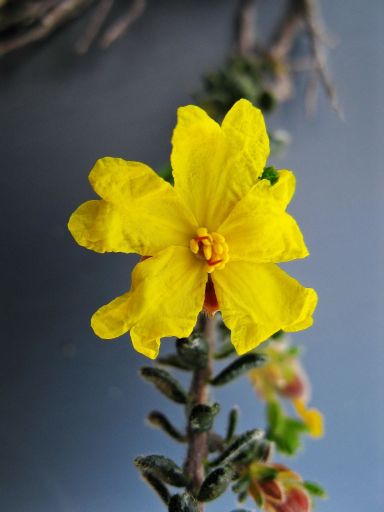