In branchlet thickness, internode length, teeth length, male spike length and cone size, Allocasuarina misera is generally smaller than A. paradoxa or A. mackliniana (populations of A. misera from eastern Victoria, however, have coarse branchlets). In addition, at least some teeth are usually erect and appressed.

Allocasuarina distyla (Vent.) L.A.S. Johnson has been reported once from near the Victoria-New South Wales border, from the upper Genoa River in 1860. This locality is much further south than any other record for this species and has not been subsequently confirmed. Allocasuarina distyla is a shrub to 3 m high with mainly smooth bark and with branchlets having angular to rounded-convex ribs which are occasionally sparsely and minutely pubescent and 6–8 erect teeth which are slightly overlapping at least when young. As such it would key out to A. misera. 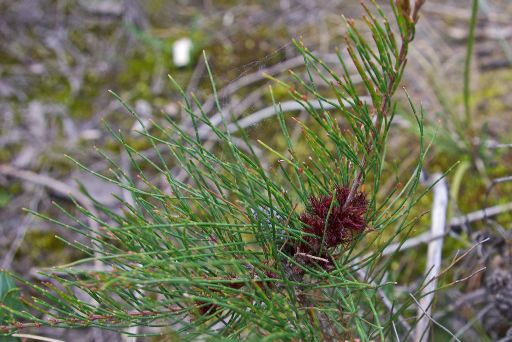