A very polymorphic species particularly in terms of fruit characteristics. Plants thought to be native often have the lower 2 spines on each mericarp much reduced and a dense indumentum of short hairs and sparse long bristles covering the fruits. Plants from near Melbourne and other urban centres which have less hairy fruit with 4 long spines on each mericarp, may be naturalized. Barker (1998) recognised two forms of Tribulus terrestris, a short-style and long-style form. The short-style form has styles 0–0.3 mm long, the style being shorter than the stigma. This form occurs predominantly in waste places in southern Australia, and is likely to be introduced. The long-style form has styles 0.6–1.4 mm long, longer than or equal to the stigma. The latter form occurs predominantly in northern Australia, and may be native (Barker 1998). It is unclear how the two style form entities relate to the two fruit form entities.

Plants are harmful if eaten by stock, causing nitrate poisoning and photosensitization in sheep as well as physical damage from ingestion of the burrs. The value of wool is lowered when the burrs become embedded in fleeces.

Barker, R.M. (1998). A trial key and notes on Tribulus (Zygophyllaceae) in Australia, including one new species and validation of Tribulus suberosus, Nuytsia 12(1): 9-35. 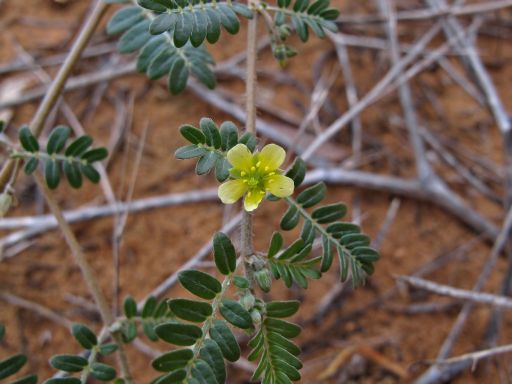