Although S. bifida can usually be distinguished from S. fistulosa by its stouter combs, intermediate (or immature) specimens can be readily separated by examining the fertile pinnae margins with a hand lens: S. fistulosa has ragged, narrow, forward pointed lobes, while S. bifida has a more or less smooth margin with numerous fine, long hairs. Specimens with branched sterile fronds were previously regarded as a separate species S. asperula. Schizaea dichotoma (L.) Sm., reported from coastal NSW and the northern parts of Australia (as well as outside Australia), can be difficult to distinguish from S. bifida. Characteristically, the sterile fronds of S. dichotoma are repeatedly forked above the middle resulting in a fan-like structure. 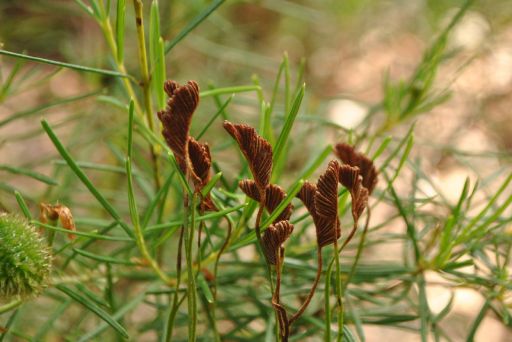