CVU, NIS, VRiv. Also NSW. Rare in Victoria where apparently confined to forests and grassy areas between Wedderburn and Moyhu in the north-east and north to the Murray River, usually in damp sandy or silty soils. Sometimes recorded from seepage areas below farm dams.

The distinction between this species and G. paniculata is sometimes unclear (at least in Victoria where flowers are reported to be larger than typical for G. macbarronii (Carolin 1992)). The variation in characters used to distinguish the two species (flower size, indusium size, shape and coloration) seems almost continuous. Generally the leaves of G. macbarronii are narrower, thicker and less distinctly toothed than those of G. paniculata but exceptions exist. A chromosome count of n = 8 for G. macbarronii, compared to n = 16 for G. paniculata (Peacock 1963), suggests that they are reliably distinct, but sampling for each is limited and polyploid series are known within some species (e.g. G. pinnatifida). 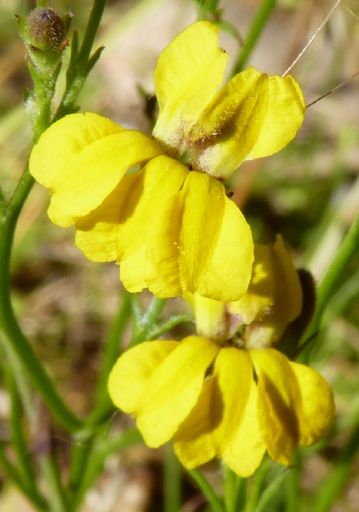