Variable in habit, leaf colour, leaf margin recurvature, and floriferousness. Forms can be identified on these features and correlate with geography. Some forms grow very close to the sea and appear to be tolerant of salt spray.

Apparent morphological intergrades with Grevillea rosmarinifolia are not uncommon in eastern Victoria and, puzzlingly, in central Victoria well west of the known distribution of G. lanigera (e.g. Geelong and western Melbourne area). They are characterized by intermediacy of stylar indumentum and nectary prominence. McGillivray (1993) recorded low pollen viability counts for some of them; they may represent relictual hybrids from a formerly more widespread G. lanigera. Willis (1973, p. 46) refers to some of these intermediates as variants of G. lanigera. 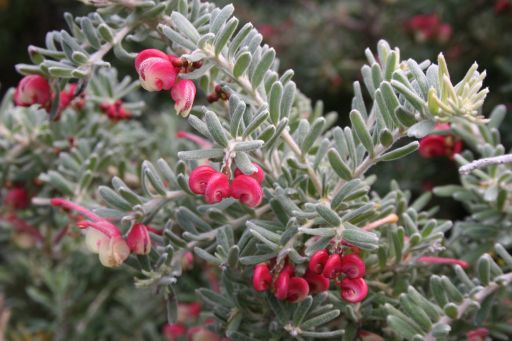