Grevillea rosmarinifolia grades morphologically and ecologically from the New South Wales Southern Tablelands (where it has a bushy to erect habit, relatively broad leaves, open foliage, and a mesic habitat) through northern and central Victoria (sporadic occurrences, variable shrubby to near-prostrate habit, and variable leaves), to western Victoria and inland New South Wales (where it is a more gregarious plant characterized by a consistently upright and dense-foliaged habit with leaves to 1 mm wide). This last variant is occasionally recognized as G. glabella R. Br. The ends of the cline are distinct but the transition zone, involving most Victorian populations, grades in both directions. Recent treatments (McGillivray & Makinson 1993; Makinson in Walsh & Entwisle 1996; Olde & Marriott 1995, have synonymised G. glabella because of the difficulty of delimitation and the ambiguous placement of many populations from central and western Victoria. Makinson (2000) resurrected 'G. glabella', treating it as a subspecies of G. rosmarinifolia. The taxonomy of G. rosmarinifolia remains unresolved. Olde & Marriott (1995) note that there are several different forms in Victoria. In eastern Victoria, the 'Crooked River form' is a dense shrub to 2 m tall, with green linear leaves and dull pink and cream flowers. This form is one of the most commonly cultivated grevilleas. Near Geelong there was the 'Lara form', which is now extinct in the wild. This form is a low rhizomatous shrub to 40 cm tall, with bluish grey leaves. Populations from Craigieburn and Anakie are similar to the 'Lara form', but are more robust.

Apparent morphological intergrades with G. lanigera occur in eastern and central Victoria (see Willis 1973, p. 46, where a 'widespread riparian population' of such intermediates is referred to G. lanigera); some such populations may deserve formal recognition, or inclusion in a more broadly circumscribed G. rosmarinifolia. See note under G. lanigera.

Two subspecies are recognised, both present in Victoria.

Key to the subspecies of Grevillea rosmarinifolia 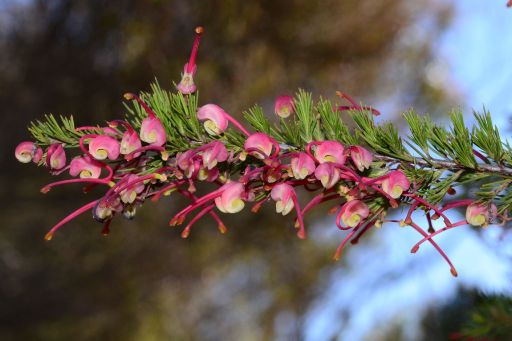