HSF, OtP, OtR, Strz, WPro. Epiphytic or lithophytic in wet forest, and usually occurring singly or as a few plants. In the Otway Range it is both lithophytic, and epiphytic on Olearia argophylla. On Wilsons Promontory, the species has been recorded only as occurring on granite (Mt Oberon). In Tasmania, the species never occurs on tree-fern trunks (unlike N. billardierei). It is likely, but not established, that such a relationship between species and substrates occurs also in Victoria.

1 of 2 subspecies occurs in Australia. Subsp. nothofageti has a solitary rather than colonial habit, more erect and slightly smaller fronds, no darkened vein endings, and generally larger spores and sporangia (Parris & Given 1976). It also occurs at higher altitudes, generally between 500 and 1100 m above sea-level (subsp. magellanica is found below 150 m). 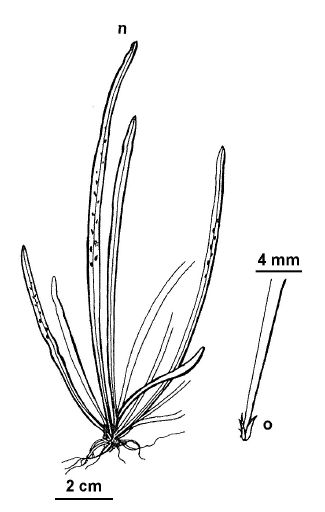