Grevillea burrowa differs from G. oxyantha subsp. ecarinata (a variable taxon) mainly in having on average shorter floral rachises and correspondingly fewer flowers per unit conflorescence (variable in same population), greater percentage of unbranched conflorescences, juvenile flower buds reflexing to c. 90 degrees (to or > 90 degrees in G. oxyantha subsp. ecarinata), purpotedly broader perianth tubes, and in having occasional hairs on the ovary. Molyneux & Forrester (2015) do not indicate whether the hairy ovary character is constant, or variable. The hairy ovary character is shared with G. victoriae subsp. brindabella, however, in that taxon some plants in the same population have hairs on the ovary, and other plants have glabrous ovaries. Recently, hairy ovaries have also been observed in G. callichlaena. Examination of cultivated plants of G. burrowa at the Royal Botanic Gardens in Melbourne shows that individual plants have some conflorescences that have flowers with hairy ovaries, and other conflorescences in which the flowers lack hairs on the ovary. Grevillea burrowa is probably better treated as a subspecies of G. oxyantha. 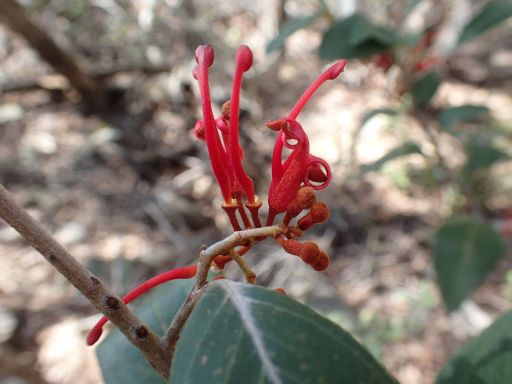