Annual slightly succulent herbs to perennial shrubs, procumbent to erect. Leaves  opposite or alternate, petiolate (rarely sessile), sometimes deciduous (at least partly during the dry season), lanceolate to linear, terete to spathulate and oval, entire, with white hairs in addition to much smaller bladded cells, or epidermis with low papillae; stipules absent or small and caducous. Flowers solitary, in groups or 2–3 or in many-flowered cymes, sessile or shortly stalked. Tepals in 1 whorl, (3–)4 or 5 tepals sometimes united at base into a short tube, usually coloured inside. Stamens numerous, isomerous or twice as many as the perianth segments, alternating with the segments, in groups or in a ring. Ovary superior, 2–5-locular; ovules 1 per locule; styles equal in number to locules. Fruit a 4– or 5-angled capsule, opening loculicidally at apex of angles. Seeds flattened, triangular to reniform, with tubercles in rows.

A genus of  c. 55 species, the majority of species are found in southern Africa; 2 species naturalised in Australia.

Recent phylogenetic reconstruction of the Aizooideae revealed that it and several of its genera are polyphyletic. The southern African genera Galenia and Plinthus (not present in Australia) are embedded in Aizoon, and are now placed into an expanded Aizoon (Klak et al. 2017). 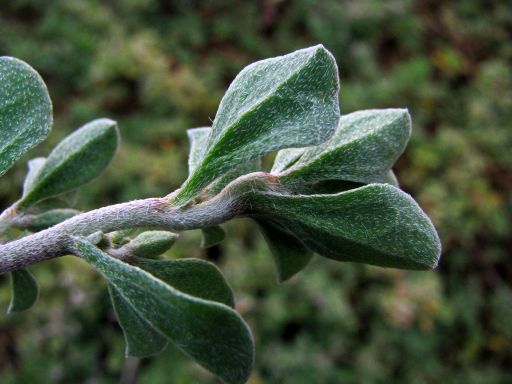