Annual or perennial herbs or shrubs. Leaves opposite or alternate, sometimes stipulate, often fleshy. Inflorescence a thyrse, or flowers solitary, axillary, terminal or leaf-opposed; flowers regular, bisexual; perianth segments (referred to here as 'sepals') 4 or 5, in one whorl; stamens 4–many; staminodes often numerous and petaloid; ovary superior or inferior, 1–many-locular; styles 1 per locule; ovules 1–many per locule. Fruit a capsule opening variously, or fleshy and indehiscent.

Many members of the family are cultivated, particularly the brightly flowered succulents commonly known as 'pigfaces' (Mesembryanthemum s. lat.), some of which are now naturalized.

Mesembryanthemum in a broad sense has previously been applied to include many currently recognized genera. These segregate genera are placed by some authors (e.g. Herre 1971) in a separate family, the Mesembryanthemaceae. Most genera included therein (but not Carpobrotus or Sarcozona) share an unusual fruiting characteristic, that is the capsule dehisces only when wet (usually by unreliable winter rains), via hydration of cartilaginous keels within each locule, an obvious adaptation to an arid habitat. Arrangement of genera within Mesembryanthemum s. lat. follows that of G. Schwantes in Herre (1971). 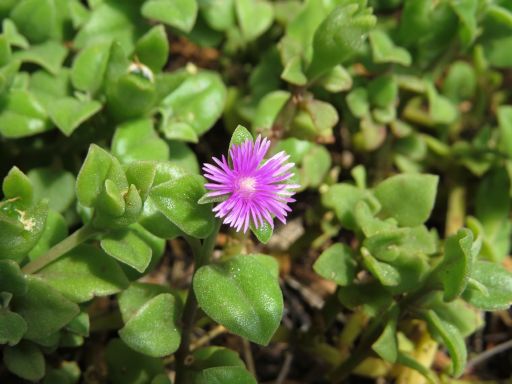