EGU, HFE, HSF, OtP, OtR, Strz. Also Tas. (including King Is.). Thought to be a sterile hybrid between C. australis and C. cunninghamii, and its distribution echoes that of the less common of those species, C. cunninghamii. It is retained as a distinct taxon due to its relatively consistent morphology wherever it occurs.

Persistent dead fronds often, but not always, skirt the trunk (other species of Cyathea may also retain a few old fronds) and it has a large crown and thick trunk like C. australis, but is generally much shorter. Once regarded as Victoria's only endemic fern taxon, it has recently been found in north-east Tasmania. A recent report of C. ×marcescens from just across the New South Wales-Victorian border near Mallacoota appears to be a misidentified C. cunninghamii. 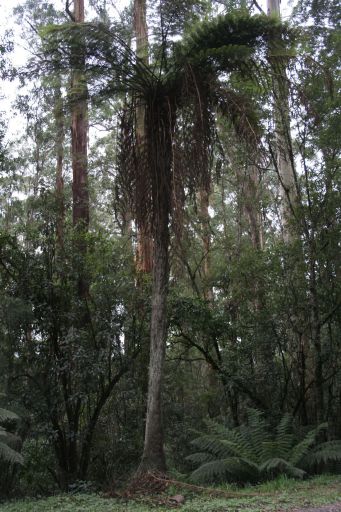