Recorded from a very few sites in the western Wimmera mainly between the Little and Big Deserts from Dimboola to Kaniva. This taxon was propagated at the Wail nursery in the early 1950’s and plants grown at this nursery are likely to have been planted widely in the Wimmera region.

Treated by the Australian Plant Name Index (APNI) as Acacia sp. Gerang Gerung (M.G.Corrick 6451). It has almost certainly been severly depleted as a consequence of conversion of its former habitat to widespread cereal cropping.

Similar in most respects to Acacia rigens, and distinguished from it by the close covering of appressed or subappressed whitish hairs and more or less terete branchlets and subappressed to weakly spreading hairs on the phyllodes. Typical A. rigens has distinctly ribbed branchlets that have minute appressed hairs between the raised, glabrous ribs, and hairs on phyllodes and peduncles are minute and appressed. Furthermore, flower heads appear to be smaller than those of typical A. rigens, with fewer 15 flowers, (cf. 20–30-flowered in typical A. rigens). 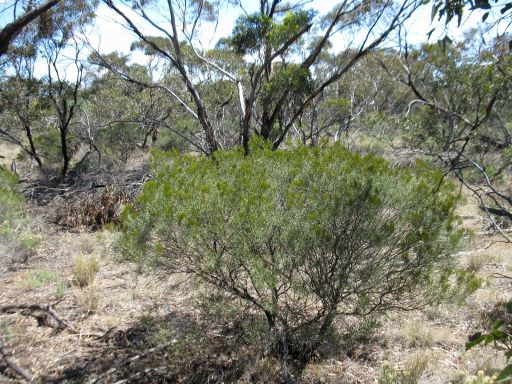