Trees or shrubs. Leaves bipinnate, reduced to phyllodes or rarely absent; stipules 2, deciduous or persistent, small, membranous or rarely spiny. Inflorescences pedunculate or sessile, globular heads or cylindric spikes, arranged singly, in pairs, in racemes in the axils of leaves or phyllodes, or in terminal panicles. Flowers numerous in the heads or spikes, bright golden-yellow to pale creamy-white; bracteoles small, brownish, spathulate or rounded and attached in the middle, sometimes absent; sepals and petals each 4 or 5, free or united; stamens numerous (more than 10), exserted, free, inserted under or just above the base of ovary; style thread-like, exceeding the stamens; ovary sessile or stalked, glabrous or slightly hairy, ovules numerous. Pod variable, linear to oblong, usually dehiscent; seeds oblong, almost orbicular or compressed-ovate, with a thread-like funicle variously folded or encircling the seed and forming an aril.

About 1070 species occurring naturally mainly in Australia, with only 18 species found outside Australia, occurring on islands of the Pacific and Indian Oceans, or in tropical Asia (Maslin 2015). Widely cultivated and many species now weedy in other countries. Acacia is the largest vascular plant genus in Australia.

Research on evolutionary relationships of Acacia has shown that, as originally circumscribed, the genus was not a single evolutionary lineage (polyphyletic), and at least five genera were required to be recognised to make each genus monophyletic (i.e. single evolutionary lineages each with a common ancestral species). Although the original type species of Acacia was African, due to the majority of species being Australian, a proposal to conserve the name Acacia against an Australian species (A. penninervis) has been supported (McNeill & Turland 2011). Prior to this, combinations for most Australian species in the genus Racosperma had been made (Pedley 1986), but following the reassignation of the type species for Acacia, Racosperma has been relegated to synonymy.

Multi-access key to the Victorian species of Acacia 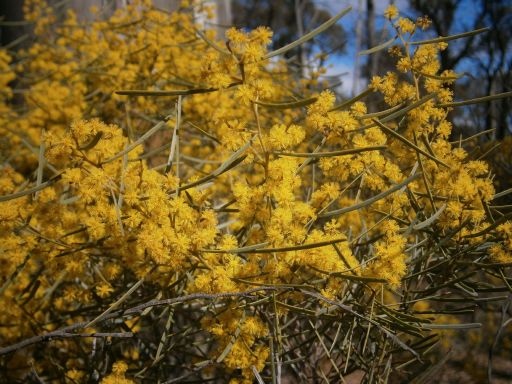