This species was previously characterised by the phyllodes only having 1 main vein. However, the definition of A. leprosa has expanded to include plants with 1 or 2 veins per phyllode. Of the 4 varieties of A. leprosa in Victoria only A. leprosa var. uninerva has phyllodes with a single vein, the other 3 varieties have 2 veins per phyllode. Acacia leprosa is now principally differentiated from A. verniciflua on the basis of branchlet indumentum. Acacia verniciflua has brachnlets with scarcely raised ribs that are more or less glabrous with dense resin in the space between them, while A. leprosa has strongly ribbed branchlets that are usually hairy on ribs and have little to no resin in the space between ribs (see Maslin & Murphy 2009). The inter- and infraspecific taxonomy of this group is incredibly complicated, and as with previous treatments, many of the characters used in this account may prove to be arbitrary at best. 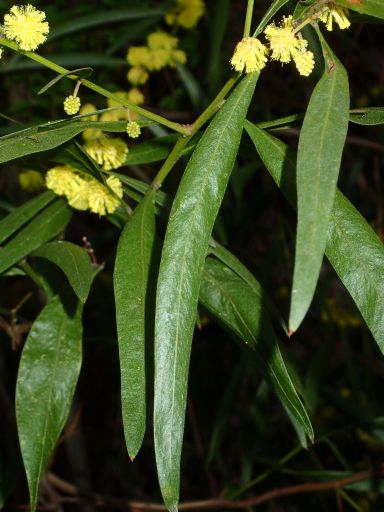