Previously this species has been arbitrarily distinguished from A. leprosa by the number of veins (the latter having only 1 main vein). However, this has shown to be an unreliable character, with both species now thought to have either one or two main veins (albeit phyllodes with 1 vein being rare for A. verniciflua). Following a revision of this group by Maslin & Murphy (2009), A. verniciflua is now distinguished from A. leprosa by the young branchlets having thick bands of dark resin between pale yellowish ribs (that are often only slightly raised), whereas A. leprosa typically has strongly angled or ribbed branchlets that are usually hairy on raised portions and have only a thin layer of resin in regions between. Five varieties are now recognised in A. leprosa (3 of which have phyllodes with 2 main veins) and 3 new species, A. exudans, A. rostriformis and A. stictophylla have been described to account for the variation observed in this widespread species complex (see notes under those species for more details).

Acacia verniciflua is highly variable, particularly in phyllode shape and size. However, few discrete morphotypes corresponding to geographic or ecological differences have been observed, and hence no infraspecific taxa are currently recognised. However, Maslin & Murphy (2009) identify 3 local variants: plants with a single main vein and strongly curved, narrow phyllodes near Seymour (previously regarded as A. leprosa (Seymour variant)); plants with wide phyllodes in the Warby Range; and plants with large bracteoles near Tooborac (see Maslin & Murphy 2009). 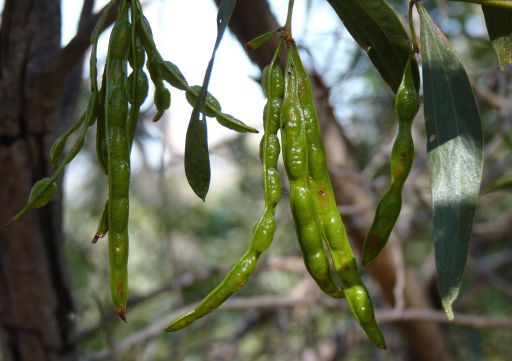