The previously used name for these plants, Diuris maculata Sm., actually refers to an endemic of the central coast of NSW. Diuris pardina is later-flowering and has more heavily blotched flowers which are mostly orange-yellow rather than bright yellow. There is considerable morphological variation within D. pardina and at least one variant from western Victoria seems to represent a distinct species. Diuris brevissima W. Fitzg. ex Nicholls, a NSW endemic that resembles Diuris pardina, has been incorrectly attributed to Victoria.

Hybrids between D. pardina and D. chryseopsis have been referred to D. ×palachila, but that taxon refers (strictly) to hybrids between D. pardina and D. behrii. Diuris pardina is also known to hybridize naturally with D. orientis, D. sulphurea and D. palustris. Many of these hybrids can back-cross with either parent species creating a confusing array of intermediate forms (Jones 1988). 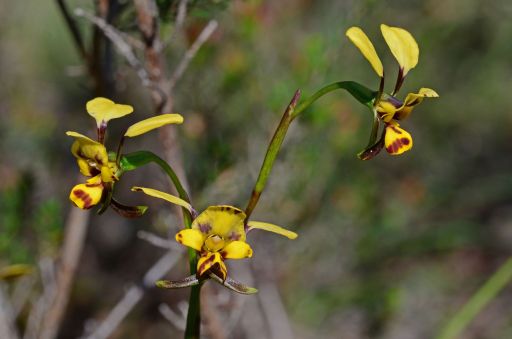