About 180 species (Anderson 2001) from southern Canada to Patagonia, east through the Caribbean, and west into the Galapagos Islands; at least 20 species naturalised in Australia (APNI).

In 1998 the opuntioid specialists of the International Cactaceae Systematics Group agreed to divide Opuntia into several genera (Anderson 2001), the treatment presented here. A number of species previously treated as Opuntia are now referrable to Austrocylindopuntia and Cylindropuntia.

Most Opuntia in Victoria reproduce exclusively or predominantly by vegetative means, i.e. detached cladodes or fragments of cladodes or detached hypanthia or fruits. Some species are always sterile or rarely fertile, although bearing long-persistent sterile 'fruit'. Recruitment by seed is common or occasional only in O. ficus-indica, O. robusta, O. stricta and O. monacantha. Many Opuntia populations originate from discarded garden refuse, or from seeds dispersed by birds.

Cladode characteristics in the account are based on mature terminal cladodes. Lower cladodes tend to be larger, more spiny, and may differ in shape and colour from mature terminal cladodes. Immature cladodes are thinner than and often different in colour from mature cladodes, and in very early stages have leaves. Fruit colours are based on ripe fruits.

The term 'tuberculate', as applied to cladodes, hypanthia, or fruits of Opuntia, refers to more or less regular, spirally arranged humps or ridges, rather than the more frequently used sense of the word 'roughened by wart-like outgrowths'.

Species descriptions based on Benson (1982), Telford (1984), field observations and collections of the authors, and (meagre) herbarium specimens.

Benson, L. (1982). The cacti of the United States and Canada, Stanford University Press.

Key to the species of Opuntia 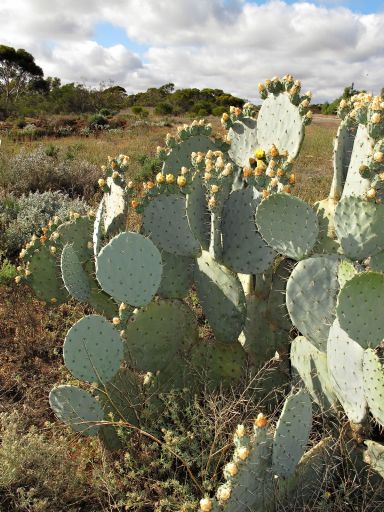