The identity of this taxon and the application of the name as used here is uncertain. The name Opuntia puberula is commonly applied to the plants that are cultivated and naturalised in Europe, U.S.A, and Australia. Telford (1984) did not provide a name for this entity, and suggested that it might represent Opuntia lubrica Griffiths, which is now treated as a synonym of O. microdasys. O. microdasys differs in having a minutely pubescent cladode surface, and lack spines. Harden (1990) employed the name O. tenuispina Engel., with the comment that O. tenuispina may be included in Opuntia sp. of Telford (1984). However, O. tenuispina is a synonym of O. macrorhiza, a rather different looking species, which forms low clumps to 13 cm high, and has much longer spines. Stajsic and Carr (1996) provisionally applied the name O. puberula, with reservation, noting that Australian plants differ from O. puberula in having a minutely muricate stem segment surface rather than being pubescent. Anderson (2001) notes that O. puberula is closely related to O. decumbens, and both species were maintained by Hunt et al. (2006). More recently, Arias et al. (2012) treat O. puberula as a synonym of O. decumbens, without providing any explanation.

It is possible that the Australian plants represent a hybrid taxon, possibly involving O. microdasys (Lehm.) Pfeiff. O. microdasys differs in having a minutely pubescent cladode surface, and the cladodes usually lack any spines. 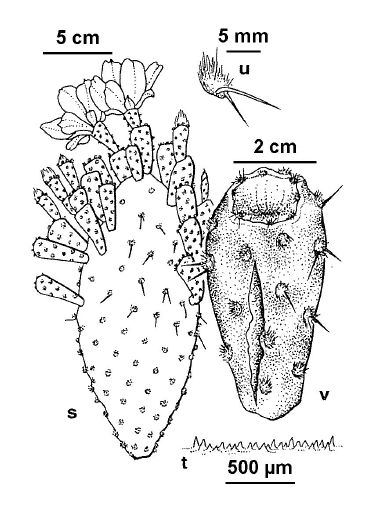