A distinctive species often forming dense large tussocks, with septate-nodulose leaves and leaf sheaths (obvious when dried), leaves relatively wide, female spikes are long-pedunculate, broad, with the long utricle beaks giving the spikes a somewhat spiny appearance, drooping at maturity, and usually spaced below male spikes. The female glumes  are long mucronate, and beak of utricle deeply divided into 2 stiff slender teeth. Very similar to Carex maorica (a New Zealand species) in appearance and habitat. C. maorica differs from C. fascicularis by the female spikes mostly sessile rather than pendent, and usually clustered at one level near the base of the male spike rather than mostly distant to ± approximate (but then never clustered at one level round base of male spike). Also similar to C. lurida (North American species, naturalisd in New Zealand), which is a more robust species (up to 2.5 m tall), has shorter female spikes (2–4 cm long), utricles 6–9 × 2-4 mm, and beak ca. half the length of the utricle. 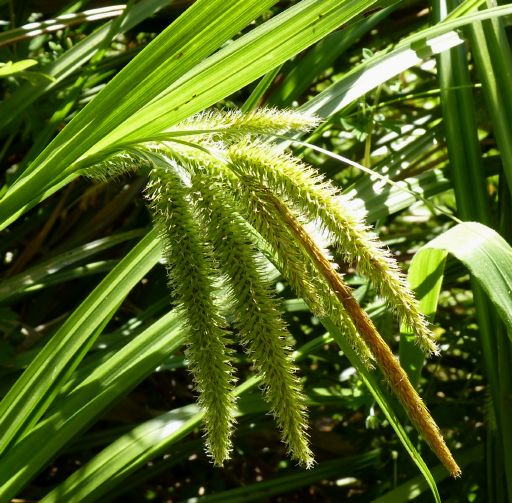