About 12 species from Australia, New Zealand and Papua New Guinea; 5 in Australia.

The taxonomy of the Triticeae (the tribe to which Anthosachne belongs) is complicated and there is a wide range of circumscription and acceptance of genera within the tribe. Anthosachne is often treated as a synonym of Elymus.

Anthoscachne plurinervis (Vickery) Barkworth & S.W.L.Jacobs is represented in Victoria by an 1874 specimen purportedly from Red Jacket, near Aberfeldy. This is a substantial disjunction from the locality for the nearest known specimen (near Thredbo, New South Wales) and is perhaps a result of mixing of labels, but the species may yet be shown to occur in Victoria. While specimens of this species from northern New South Wales and Queensland appear distinctive, a large number of specimens appear rather intermediate between A. plurinervis and A. scabra. It is distinguisihed from A. scabra in having relatively broad, chaffy, 6–8-nerved rather than 2–4(–5) nerved glumes that are 10–15 mm long, and upper glumes that taper to the apex from above rather than below midway. 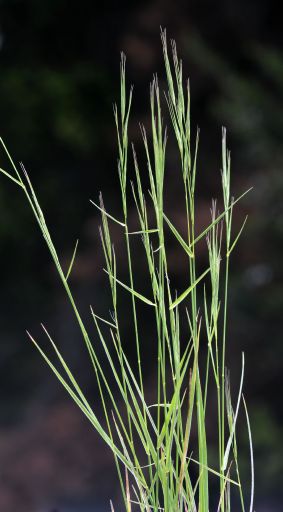