Annuals or perennials, tufted, stoloniferous or rhizomatous, herbs, occasionally shrubby or tree-like (bamboos). Leaves alternate, 2-ranked (except in tropical Micraira), with sheaths embracing the stem and blades more or less spreading; ligule usually developed at sheath-blade junction, either a membranous collar, a row of hairs or a combination of both. Stems usually hollow between the nodes. Inflorescence a panicle, raceme or spike, comprising several to many spikelets (rarely a solitary spikelet). The typical spikelet consists of two opposite rows of bracts, the lower two of which (the glumes) are empty, and the remainder (the lemmas) each enclosing a small, naked flower and a hyaline scale (the palea). The flower consists of an ovary surmounted by two stigmas and subtended by 2 or 3 fleshy scales (lodicules), and/or 3 (rarely 1, 2, 4 or 6) anthers. The combined flower, lemma and palea comprise a floret. There are one to many florets in a spikelet. The fruit is one-seeded, either with the pericarp adnate to the seed coat (a caryopsis) or with the pericarp larger than and loosely enclosing the seed.

About 650 genera and 9500 species world-wide, inhabiting virtually all environments; c. 240 genera and 1394 (including 352 naturalized) species in Australia; 126 genera and over 400 species in Victoria. The systematic arrangement of tribes and genera generally follows that of Clayton and Renvoize (1986); however, recognition of some genera and the placement of some species is at variance with those authors.

Maize or Corn (includiing Sweetcorn), Zea mays L. is included in the key to genera, but not treated further in this account. This familiar and globally important food plant is commonly grown, but rarely appears spontaneously outside of gardens. It is a summer-growing annual, native of Mexico and has been bred for thousands of years. Commonly cultivated forms now undoubtedly little resemble the original wild form. It is distinctive amongst most grasses in having quite separate male and female inflorescences, the former terminal on the tall, stout erect leafy stem (sometimes branched at or near base), and the latter in leaf axils. The long stands of 'silk' of the 'ears' or 'cobs' are the styles through which pollen tubes grow to fertilise the large, crowded ovules that remain enclosed within specialised leaves or spathes.

Key to the genera of Poaceae 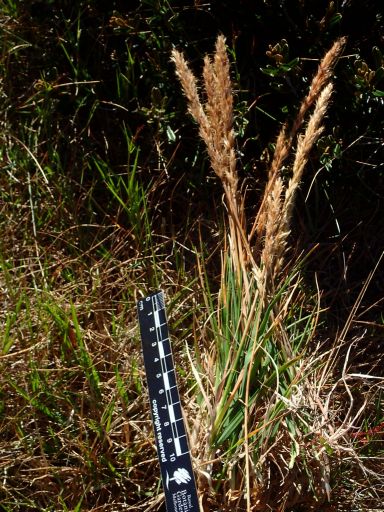