Tufted, rhizomatous and/or stoloniferous annuals or perennials. Leaf-blades flat; ligules a fringed membrane or a fringe of hairs. Inflorescence a spike or spike-like raceme. Spikelets enclosed within an involucre of bristles or rigid spines or a combination of both, from one to several spikelets per involucre, the whole falling as a burr at maturity; glumes one or two, as long as or shorter than the spikelet; lower floret neuter or male, sometimes lacking a palea; upper floret bisexual, its lemma papery or hardened.

About 100 species, from warm-temperate and tropical countries; 24 in Australia (6 native), 8 in Victoria (all naturalised).

Pennisetum was until recently regarded as a genus separate from Cenchrus but the distinguishing feature (the involucre composed of free bristles rather than bristles and/or scales that are united to some extent) was known to be weak for a number of species. Subsequently molecular data has supported the inclusion of Pennisetum into Cenchrus, the earlier-named genus. Grown for ornament and forage, but many species are 'tranformational' weeds (i.e. they dominate and change natural ecological processes within invaded communities). 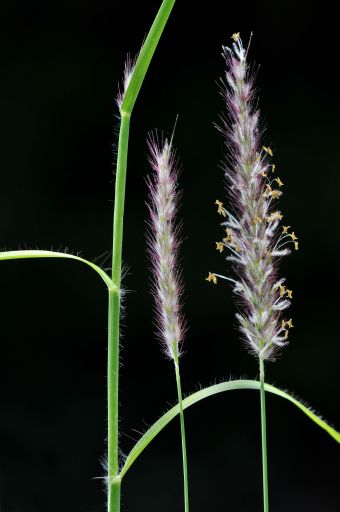