Care should be taken when identifying Eragrostis species as the spikelets elongate rapidly just prior to anthesis, so that immature spikelets may measure well below the dimensions given in descriptions.

A few non-native species have been recorded from Victoria from dubious sources or misidentified specimens. Eragrostis pectinacea (Michx.) Nees (Carolina Lovegrass) was recorded for Victoria on the basis of a 1904 specimen purportedly collected in the Grampians, since redetermined as E. mexicana (Hornem.) Link. Eragrostis superba Peyr. (Heart-seed Grass) was reported by Lazarides (1997) for Victoria, but no specimens are known from this State. A specimen from Dareton, NSW, near Mildura exists, but this was from a cultivated plant. Eragrostis tef (Zucc.) Trotter (Tef Grass) is sometimes grown for grain and/or fodder, and the sole Victorian specimen (Kerang, 1922) is believed to be from a cultivated source. These species are not treated further in VicFlora.

As well as these exotic species, native Eragrostis pergracilis S.T.Blake was reported for Victoria by Lazarides et al. on the basis of a specimen collected from Avon Plains (between St Arnaud and Minyip). This is a fairly common species of inland Australia, but the Avon Plains record represented a large southerly disjunction. The specimen has been redetermined as E. dielsii Pilg. 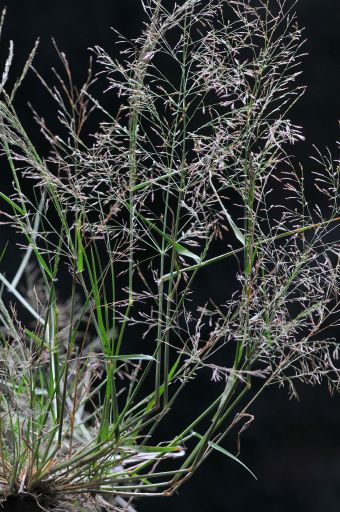