Perennial herbs, shrubs, climbers, or rarely trees with arborescent stems, aerial shoots annual or evergreen. Rootstock tufted or a rhizome,or bulb; roots fibrous or tuberous. Leaves simple, alternate, opposite or verticillate, sessile (often sheathing at base), or pseudopetiolate, occasionally reduced to scales, and then cladodes present; venation parallel (mostly) or reticulate. Flowers unisexual or bisexual in terminal or axillary spikes, racemes, or panicles, rarely corymbs, umbels or solitary and terminal, naked or subtended by leaves or bracts. Perianth scarious or membranous, in 2 whorls of 3, outer and inner whorls similar or differentiated into sepals and petals, or the two whorls similar and fused. Stamens free or partially fused to perianth, 6, rarely 3, filaments free or connate, opposite perianth lobes; anthers 2-locular, dehiscing by longitudinal slits or by apical pores. Ovary superior, rarely inferior, 3-locular; ovules 1-many per locule; style single (rarely 3) with as many stigmas as carpels, or solitary and capitate. Fruit a berry, capsule, or dry and indehiscent; seeds globular to flattened, sometimes winged, smooth or variously ornamented.

Currently Asparagaceae is defined by a molecular phylogeny, with no characteristic morphological features that may define this large and heterogeneous family. At the phylogenetic level, all taxa in Asparagaceae are regarded as higher asparagoids, possessing the successive microsporgenesis type. Plants tend to have small flowers that form racemes, with 3–4 bracts subtending but not enclosing the inflorescence, or with bracts absent. However, these gross morphological features are not consistent throughout the family. Seven subfamilies have been adopted to accommodate the variation, and attempt to recognise useable, morphological groups within Asparagaceae. Smaller groups have not been adopted as families by APG as many of these smaller families also become difficult to define morphologically. Furthermore, the application of such a large number of small families becomes impractical (Chase et al. 2009). 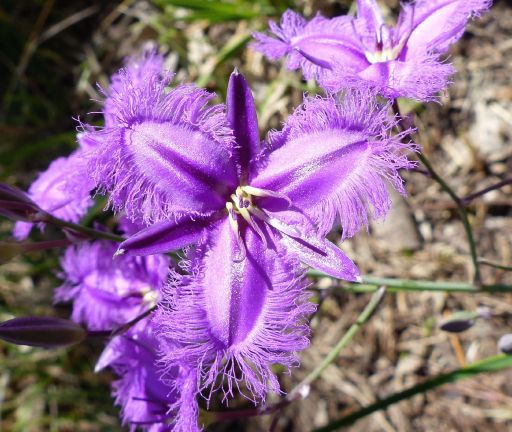