Some specimens while agreeing with all other characters of subsp. oleifolia, lack rust-coloured hairs on the leaf undersurface; they may represent hybrids with subsp. cinerea, as apparently occur in New Zealand (Webb et al. 1988).

Salix ×calodendron Wimm. (a hybrid of S. caprea L., S. cinerea subsp. oleifolia and S. viminalis L.) of Britain and western Europe, an erect multi-stemmed shrub or small tree to 12 m high, has been planted for stream stabilization in the catchment of the Ovens River and may be naturalized. It has striated wood; densely pubescent twigs and shoots; and entire leaves which are prominently petiolate, ovate to oblong-elliptic, to c. 10 cm long and 5 cm wide, dull and thinly pubescent above, and glaucous-pubescent beneath. Only female plants are known (it apparently does not produce seed) and the catkins, to c. 7 cm long, are densely long-sericeous. It is naturalised in New Zealand (Webb et al. 1988). 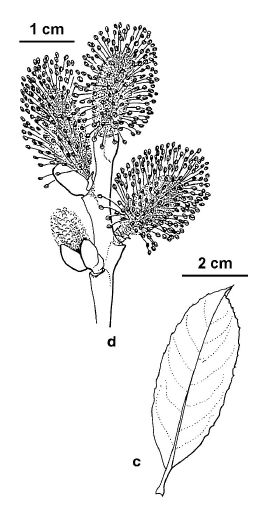