A very variable species in habit and foliage. Olde & Marriott (1995a) delineate a number of forms. The dominant form in the Grampians has large leaves with deep, regularly arranged triangular lobes. Also in the Grampians, a distinctive population occurs in the Mt Difficult-Lake Wartook area; this population has smaller leaves (often 1–4 cm long) with sparing obtuse shallow lobing (commonly 3–7-lobed, rarely a few 1-lobed or entire); plants of this form may be prostrate or erect, and may grow adjacent to and intergrade with the commoner form. Prostrate plants may superficially resemble G. repens, but are easily differentiated by their tomentose perianths, leaf undersurfaces, and branchlets. Populations in far western Victoria and South Australia have fairly large leaves, with numerous regular but shallow lobes.

Often confused with G. ilicifolia, which has the hairs on the outside of the perianth appressed, those of the ovary 'tidy' and antrorsely aligned, and those of the undersurface of the leaf usually appressed and straight. 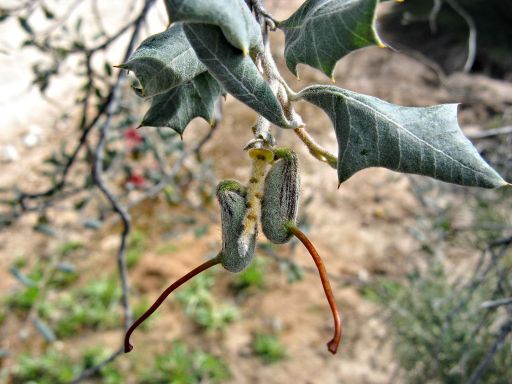